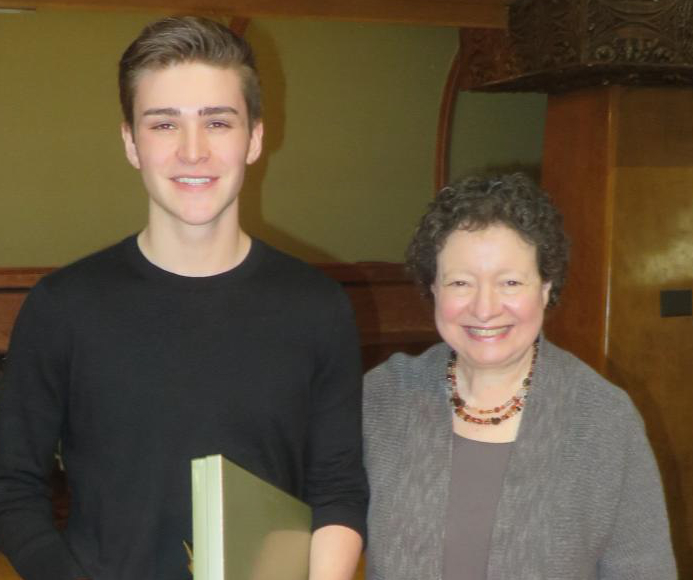 Harry Thornton from Evanston, a student of Anne Lefkocitz at Evanston Township High School in Evanston, won the English-Speaking Union Chicago Branch regional Shakespeare competition. The event was part of the English-Speaking Union National Shakespeare Competition. Harry Thornton had already won his school Shakespeare competition at ETHS. The ESU Branch competition was held on Monday, February 9 at Roosevelt University in Chicago, and 23 school winners from the Chicago area participated. Harry impressed the judges and captivated the audience with his performance of Hamlet and his recitation of Sonnet 136. He will go on to represent the Chicago area as a semi-finalist at National competition in April (regularly held at the world-renowned performing arts complex, Lincoln Center, in New York City).

Thornton will be awarded an all-expenses-paid trip to New York City for the final stage of the Competition. The ESU National Headquarters will also provide Thornton with two full days of educational and cultural activities. Past activities have included Broadway shows, acting workshops and visits to the William Shakespeare statue in Central Park. Perhaps best of all for Thornton will be the opportunity to spend a weekend with other Branch winners from across the country, who share his love of the Bard and his works.

Richard Thomas, Courtney B. Vance, Sam Waterston, Dianne Wiest, Gene Wilder and Irene Worth. The English-Speaking Union National Shakespeare Competition is a performance-based education program in which high school students nationwide read, analyze, perform and recite Shakespearean monologues and sonnets. Through the program, students develop communication skills and an appreciation of the power of language and literature. In three progressive competition levels, students present the Bard's works in their own schools, at ESU Branch sponsored community competitions and at the National Shakespeare Competition. For over thirty years, the program has given more than 250,000 young people of all backgrounds the opportunity to bring the timeless works of Shakespeare to life and learn to express his words with understanding, feeling and clarity.

The English-Speaking Union is a non-profit, non-political educational organization, whose mission is to celebrate English as a shared language to foster global understanding and good will by providing educational and cultural opportunities for student, teachers and its members. The ESU carries out its work through a network of 70 Branches and affiliates in the United Kingdom and 60 other countries, sponsoring a variety of language and international education programs. For information on joining The English-Speaking Union of the United States, visit www.esuus.org or call 212-818-1200