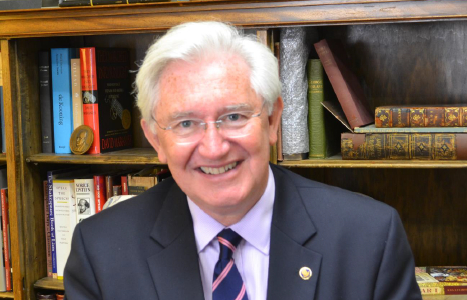 (New York, September 28, 2015)  Dr. Paul Beresford-Hill MBE was elected Chairman of The English-Speaking Union of the United States unanimously at a meeting of its Board of Directors on September 27.  His two-year term of office began immediately.  Dr. Beresford-Hill was selected to lead the English-Speaking Union of the United States for his global experience as a scholar, educator, administrator and author.
Paul Beresford-Hill is a distinguished educator who has worked in the secondary and tertiary educational systems of the US and the UK.  A graduate of both Oxford University and Columbia, he has been a Research Associate at the Oxford Department of Educational Studies, Senior Member of Wadham College, Oxford, and an Adjunct Professor at Columbia University Teacher's College.  He has worked in the US, the UK and Asia, and was Chief Administrator for Global Learning at Dowling College in Long Island.  From 1999 to 2004 he was Director of Bangkok Patana School, the British International School in Thailand, one of the largest international schools in Asia.
Dr. Beresford-Hill is currently the Director General of the Mountbatten Institute, a post-graduate institute of higher education specializing in international business training.  He founded Mountbatten thirty years ago to provide structured international business experience for recent university graduates. The Institute has MBA degree validation with St. Mary's University, London, and MA validation from the University of Chester and sponsors more than 500 post-graduate trainees each year with businesses and corporations in New York, London and Bangkok.  Students in the Mountbatten Institute undertake year-long practical training in international business practice while also studying for advanced qualifications in business.
Dr. Beresford-Hill was appointed MBE in 1991 in recognition of his contribution to British American education and training.  He is the author of several books, including Education and Privatization in Eastern Europe and the Baltics, and From Cooperation to Collaboration-Resource Sharing in Education, and has published articles in the Oxford Review of Education, Education Today and the Journal of Southeast Asian Education.
In his spare time Dr. Beresford-Hill is an avid art historian and is currently collaborating on a book exploring the influence of British colonial artists on the 20th century artistic development of Burma.  He and his wife, Kathryn, make their home in Westchester County, New York.
On April 27, 2015, Paul accepted the English-Speaking Union Founder's Award for his role in launching the ESU National Shakespeare Competition.  In 1983, while headmaster of the Anglo American School in New York, Dr. Beresford-Hill conceived a Shakespeare competition to be a part of the Britain Salutes New York festival.  Envisioning that the ESU might continue it into the future, Dr. Beresford-Hill asked the ESU to host the competition.  The ESU developed and expanded the competition through its network of Branches to be its flagship national educational program.
Dr. Beresford-Hill assumed the Chairmanship of the English-Speaking Union upon the resignation of educator and historian Josiah Bunting III, who had served as Chair of the ESU since 2013.  Prior Chairmen of The English-Speaking Union of the United States include President of the United States Dwight D. Eisenhower; Secretary of State Edward R. Stettinius, Jr.; Attorney General George W. Wickersham; Supreme Allied Commander in Europe General Alfred M. Gruenther; Congresswoman the Hon. Patricia Scott Schroeder, JD; Security and Exchange Commission Chairman J. Sinclair Armstrong; former President of Yale and US Ambassador to the Court of St. James's Kingman Brewster; as well as six other ambassadors to the UK, one to Canada and one to Turkey.
Assuming the Chairmanship, Dr. Beresford-Hill said, "I am privileged and excited to accept the Chair of the
English-Speaking Union of the United States and be charged with helping further its important mission.  I would like to pay tribute to Josiah Bunting III, the outgoing Chairman, for his inspired leadership and his tireless efforts on behalf of the ESU.

The English language has become the currency of global communication, its reach extending to every corner of the globe furthered through internet and media access.  Within the United States it is the language that binds our nation through which the Founding Fathers expressed their desire for freedom and unity.  For today's immigrants, of all races and creeds, English is an essential tool for access to business and community and reflects, in its usage, our national identity and aspirations.

Over recent years, the ESU of the US has committed itself to education, scholarship and understanding, while also embodying many of those attributes reflected in the 'special relationship' between the United Kingdom and the United States.  Those bonds are further expressed through the international ESU commitment to the Commonwealth and its active presence in many other nations.  As new generations of Americans prepare to offer leadership in a world that, sadly, reflects divisions rooted in intolerance and misunderstanding, there is need for more effective communications and a greater appreciation of those aspects of the human condition that unite rather than divide us.
The English-Speaking Union will continue to play an important role in fostering and promoting the English language as a force for good and a force for understanding and fellowship both at home and abroad."