Congratulations to 2017 TLab Scholar Daniel Slowick of Falcon Cove Middle School who will study at the Shakespeare's Globe.

A Message from the Fort Lauderdale Branch President

The English-Speaking Union of the United States is part of a worldwide, non-profit, non-political, educational organization whose mission is "Creating Global Understanding through English".

The Fort Lauderdale Branch of the English-Speaking Union of the United States is a small part of this organization that is spread around the world. We are one of more than 68 Branches across the United States and we share a common mission with more than 50 ESU branches overseas.

Our common goal is to promote scholarship and the advancement of knowledge through the effective use of English in our global community. Achievement of this goal depends upon many large and small Branches who work in a variety of stimulating and interesting programs. 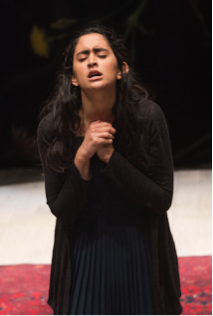 With a performance of a sonnet and monologue from Shakespeare, Danielle Gonzalez from Tamarac, FL, a student of Cynthia Lutwin at Cypress Bay High School in Weston, placed as a semi-finalist in the 34th annual English-Speaking Union National Shakespeare Competition in New York City. The Competition took place on May 1, 2017 on the stage of the Mitzi Newhouse Theater at Lincoln Center with 54 semi-finalists from as many ESU Branch competitions nationwide. Danielle previously won the ESU Fort Lauderdale Branch competition.

We invite local middle and high school educators across the country to celebrate Shakespeare's 450th birthday this year by participating in the 2014 Shakespeare Teacher Intensives:  Romeo and Juliet.  This partnership program with the world-renowned Folger Shakespeare Library allows teachers to learn the Folger's easily-adapted methods and receive materials designed to engage their students in the Bard's works.   Learn more about this program and register today.

It's the perfect PD opportunity for secondary English and drama teachers.  Brush up on your Shakespeare or learn to love the Bard; both new & experienced educators welcome.

Shakespeare Set Free is a partnership program between the ESU and the Folger Shakespeare Library.