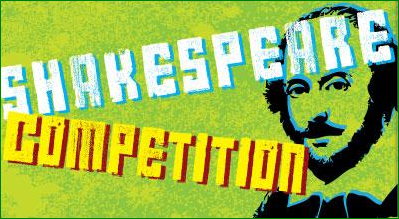 Wyatt McCall, a junior at Olathe Northwest High School, won first place in the Kansas City competition. McCall impressed the judges and captivated the audience with his performance of King Richard III from the play Richard III and his recitation of Sonnet No. 61.

Click here to see a Fox News Report on Wyatt

On April 22, Wyatt represented the Kansas City branch and placed as a semi-finalist at the National competition on stage at Lincoln Center in New York City.  His activities in New York City included two full days of educational and cultural activities, including an exclusive acting workshop at New York University's Tisch School of the Arts and a performance of the Royal Shakespeare Company's Julius Caesar at the Brooklyn Academy of Music.  Perhaps best of all was the opportunity to spend a weekend in New York City with other students from across the country who share a love of theater, language and, particularly, Shakespeare.

Wyatt's first place prize package from the Kansas City Branch consisted of a check for $150.00, an engraved First Place Winner Medal and he was awarded a full scholarship to the Shakespeare Exploration, a camp offered by the Heart of America Shakespeare Festival.

Thomas has a Ph.D. in English, with a specialization in Elizabethan drama, from the University of Louisiana at Lafayette. Currently, he is pursuing a second master's degree in Theatre at UMKC, where he has been the dramaturg for productions of The Country Wife, Great Expectations, and A Midsummer Night's Dream. Dr. Canfield teaches Shakespeare and Foundations of Theatre at UMKC, and is a professor of English and Humanities at National American University.

Sidonie is the Executive Artistic Director of the Heart of America Shakespeare Festival.  . For the Shakespeare Festival she has directed The Taming of the Shrew, Hamlet, Julius Caesar, Much Ado About Nothing, Twelfth Night, Romeo and Juliet, Merry Wives of Windsor, Othello, King Richard III, Macbeth, Antony and Cleopatra and A Mid-summer Night's Dream.  This summer Sidonie will direct  As You Like It, June 18 – July 7, 2013, in Southmoreland Park.

Carla has been a professional actor for nearly 25 years, and currently teaches in the UMKC Professional Actor Training (M.F.A.) Program, where she recently directed King Lear, Cymbeline, The Tempest, Pericles and Miss Julie.  Most recently, she played Lily Forrestal in Theatre Latte Da's Song of Extinction at the Guthrie Theatre, Sarah Goodwin in the Unicorn Theatre's Time Stands Still, and Queen Elizabeth in the Heart of America Shakespeare Festival's King Richard III.