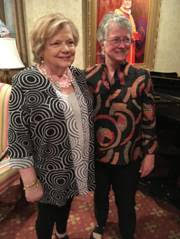 The program chairman, Carolyn Mitchell, introduced the speaker, Dr. Elizabeth Dowling (both pictured left), who is an architectural historian and has several books on the subject to her credit. She taught architecture at Georgia Tech for 37 years, Dr. Dowling gave a slide presentation depicting the very beginning of classic Greek and Roman architecture and how it influenced architecture through the centuries,  Classical architecture began to decline in England when it became too expensive to design and build structures, especially after the world wars.  Fortunately, during the late 80's a resurgence of interest in the preservation of classical design began to immerge in the U.S. and England by architects like Jon Simpson, Quinlan Terry, Craig Hamilton and even a local Atlanta architect, Norman Askins. Universities began to offer classes on classic design.   Prince Charles was instrumental in expressing the need to bring back classicism as opposed to the ultra-modern offerings that have been erected in London in recent years.  Dr. Dowling showed us some buildings in London that were built recently in the classic style.  The same is going in the United States.