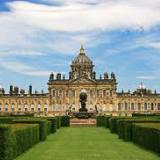 For More Information or to
Purchase Tickets: Click Here

Deeply involved in the Historic Houses Association, the body that represents some 1500 historic houses in private ownership in the UK, The Hon. Simon Howard served as Chairman of the Yorkshire Region from 1986 to 1997; Chairman of the National Tourism and Commercial Development Committee from 1995 to 2005; and from 1996 he was a Director of the Association.

He has also been the Chairman of the Treasure Houses of England since 1995 and represents them in The Association of Leading Visitor Attractions. He was High Sheriff of North Yorkshire in 1995, and has been a consultant to Sotheby's since 1998.

Educated at Eton College, The Hon. Simon Howard then read Rural Estate Management at the Royal Agricultural College at Cirencester in Gloucestershire. He spent time working at the fine art gallery Agnews before taking a post-graduate course in the History of Art at the Centre for Fine and Decorative Arts, in London.

Home to the Howard family for over 300 years, Castle Howard is a magnificent 18th-century building set in 1,000 acres in North Yorkshire.Today, the house and its monumental landscape are familiar to audiences as Evelyn Waugh's fictional "Brideshead," from both the 1981 television adaptation and the two-hour 2008 movie.

Building at Castle Howard began in 1699, under the 3rd Earl of Carlisle. Much of the building was constructed between 1699 and 1714 by architect Nicholas Hawksmoor, to a design by the Earl's friend Sir John Vanbrugh.The result was a Baroque masterpiece–exuberantly decorated with coronets, cherubs, urns, and Doric and Corinthian pilasters–featuring a central block crowned by a central dome, with east and west side wings.

Tragically, a fire swept through the building in 1940 destroying principal and upper levels as well as the dome, which collapsed into the Great Hall. Successful rebuilding and restoration by the Howard family began 20 years later and the dome replaced in 1960. Now the house contains exquisitely decorated rooms filled with family's collection of 18th-19th century paintings, porcelain, furniture, and antique sculpture.The world renowned painting collection includes Canaletto and Zuccarelli paintings purchased by the 4th Earl; Italian and Flemish Old Masters and portraits by Sir Joshua Reynolds and Thomas Gainsborough collected by the 5th Earl in the late 18th century; and 19th-century works by William Morris and Edward Burne-Jones commissioned by the 9th Earl and Countess.

Join The Hon. Simon Howard as he lectures about Castle Howard and gives a visual personal tour of the house and its extraordinary landscape with temples, lakes, and fountains. Mr. Howard will talk about the generations of his family who have contributed to the house's rich history. He also will describe modern living at Castle Howard and the ongoing preservation and restoration projects that will ensure its survival into the future.