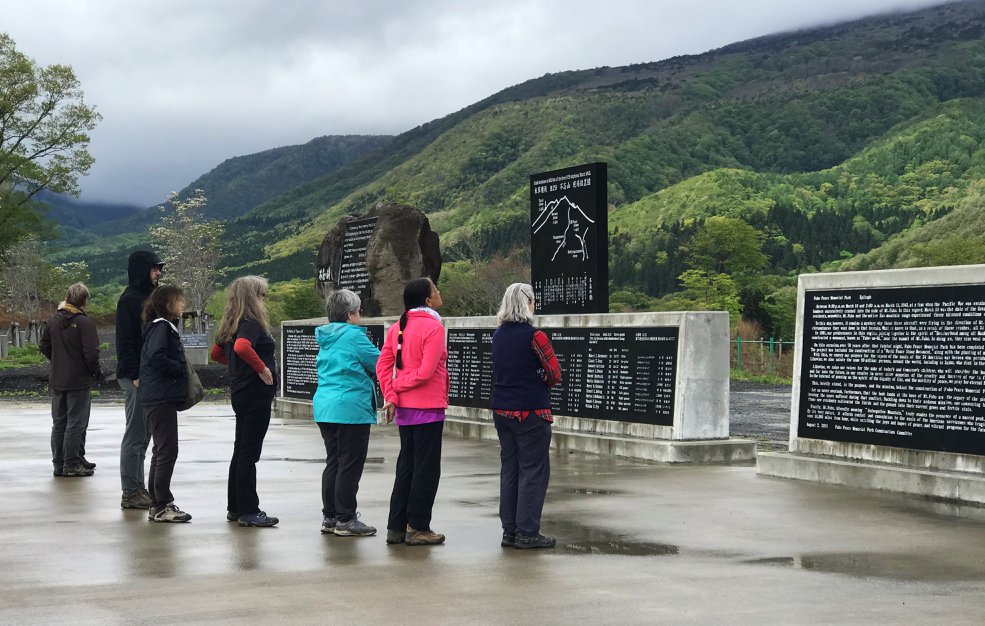 Several years ago, it was by chance that I learned the Fubo Peace Memorial Park, that memorializes 34 WWII American Army Air Corps crewman, was dedicated in Japan in 2015. As the niece of one of the crewmen who is memorialized in this little-known peace park, I spent many hours and months researching how and why the Japanese chose to construct it 70 years after Japan's surrender ended the war in the Pacific Theater. What I learned, has been shared in many presentations and news articles, and I am happy to have the opportunity to share this extraordinary story with members and guests of the English-Speaking Union.

This presentation is about a little-known inspiring story of peace, brotherhood and reconciliation. It is a story of the humanity, respect and brotherhood, Shiroishi villagers in northern Japan, extended to 34 American crewmen, who perished when three B-29 bombers crashed into Mt. Fubo on March 10, 1945, within minutes of each other, returning from the raid on Tokyo. In addition to making the arduous climb up the mountain, collecting and respectfully burying them with "Bushido Spirit" in a mass grave, the villagers memorialized the crewmen in 1961 with a monument at the summit of the mountain, and in 2015, constructed Fubo Peace Memorial Park at the foot of the mountain, dedicated "in memory of the American crewman and to salute the 50 million around the world including Japan, who died during WWII".

Before retiring December 2014, in her 30-year career as Executive Director, Susan Moffat-Thomas provided executive public management and leadership of downtown initiatives for Swiss Bear Downtown Development Corporation, a nonprofit organization, established in 1979 to spearhead and coordinate the revitalization of the downtown and redevelopment of its waterfront. Her downtown initiatives included facilitating and packaging economic development projects, strategic planning for future initiatives, and comprehensive planning for the viability of downtown and waterfront areas and organization of special events such as Mumfest. Through the combination of efforts, downtown New Bern had over 230 million dollars of private, economic investment and over 252 new business opening since the mid-1980's with 2,300 people now employed in downtown. Under Moffat-Thomas' leadership, Swiss Bear Downtown Corporation has won numerous national and state awards. In her retirement, in a two-year stint, organized and coordinated the successful re-start of the defunct Craven Community College Adult Enrichment Program.

Susan has selected the "Island Comfort" cocktail for its connection to her home of New Bern as Pepsi Cola was invented there.