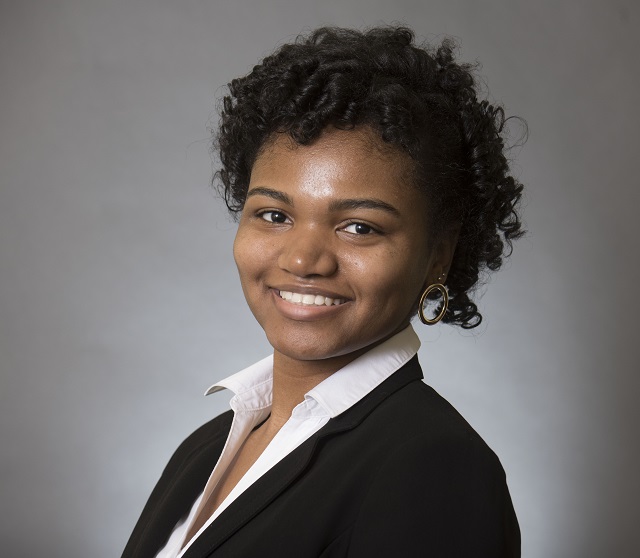 Ms. Kyana Washington of Manvel, TX, an English major from Spelman College, has been selected as the English in Action 2018-2019 Luard Morse Scholarship recipient. Christopher Broadwell, Executive Director of the English-Speaking Union, announced the winner, noting that Ms. Washington will receive up to $25,000 toward a semester of study at a university of her choosing in the United Kingdom during the 2018-2019 academic year.

"Being selected as a Luard Morse Scholarship finalist has been an amazing experience. I've enjoyed meeting inspiring students and alumni from Historically Black Colleges and Universities around the country," Ms. Washington stated at her qualifying interview in New York on Thursday, January 18, 2018. "It was a pleasure to have been able to engage in a thought-provoking discussion about feminism, literature, and current events. My interview has inspired me to continue my intellectual exploration and to continue pursuing my goal of becoming an advocate for women in my study of both English and Philosophy."

Ms. Washington has expressed interest in attending Oxford, University College London or Cambridge. During her semester abroad, she will serve as an unofficial ambassador for the United States and, upon her return to Spellman College, for the United Kingdom. The other finalists for the 2018-2019 Luard Morse Scholarship were Mr. Alexander Asemota of Memphis, TN from Howard University; Ms. Diane Ijoma of Columbia, MD from Howard University; and Ms. Alexis Jones of Washington, DC from Bennett College.

Since 1969, The English-Speaking Union has provided Luard Morse Scholarships to students attending Historically Black Colleges and Universities as well as Howard and Hampton Universities to study in the United Kingdom. These merit awards, which are open to sophomores pursuing a four-year degree, provide up to $25,000 for a semester of study at any university in the United Kingdom. Students in all disciplines are eligible. The scholarship has been awarded to students majoring in economics, philosophy, finance, mathematics, liberal arts and the sciences.

For additional information about the Luard Morse Scholarships, visit www.esuus.org/esu/programs/luard_scholarships or contact Ms. Carol Losos, Director of Education, at closos@esuus.org or 212-818-1200, ext. 224.