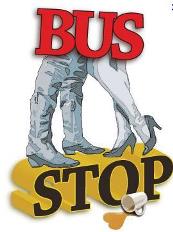 On March 30, 2012, ESU members and guests attended the classic William Inge play, Bus Stop, performed by a new local theatre group from Lee's Summit, The Summit Theatre Group. This inaugural production was directed by our own ESU member and board member, Ben Martin. Ben has been an ESU member for 14 years including past treasurer and retired from teaching high school theatre after 34 years, 18 of which were in the Lee's Summit School District.

Bus Stop is a 1950s comedy-drama, with romantic elements and is set in a roadside cafe in a small Kansas town about 20 miles west of Kansas City during a snowstorm from which bus passengers must take shelter.

To add an atmosphere of authenticity, The Summit Theatre Group partnered with Lee's Summit's Neighborhood Café to perform the play in the restaurant as a dinner theatre production. Patrons ordered from a select menu of Neighborhood's favorite items, then enjoyed the show performed around them in an actual restaurant setting. What could be more fun than seeing Bus Stop in an actual neighborhood cafe called, what else, The Neighborhood Café?"