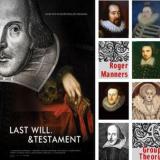 A Quest for the Truth to this Centuries-old Question

An advance screening of a new documentary film, "Last Will. & Testament,"—exploring the greatest literary mystery of all time: who wrote the works of William Shakespeare? — was shown on Sunday, October 14, 2012, at 1:30 PM at the Tivoli Manor Square Theatre, 4050 Pennsylvania Ave., Kansas City, MO.  Admission was free.

Golden Globe nominee Derek Jacobi leads an impressive cast of scholars and actors featuring Oscar Winner Vanessa Redgrave and Tony Winner Mark Rylance on a quest to uncover the truth behind the world's most elusive author, and discovers a forgotten nobleman whose story could rewrite history.

Kansas City was selected as one of 15 cities to offer an advance screening of this remarkable documentary film prior to its U.S. premiere at the Austin Film Festival in late October.  The screening was followed by a panel discussion with Q & A's.  Lisa Wilson, co-director and co-producer of the documentary and Dr. Felicia Londré, Curators' Professor of Theatre at The University of Missouri at Kansas City, headed a discussion focusing on the four-hundred year old controversy and the research behind the documentary.

Shakespeare's plays and monologues are widely studied by academics worldwide and yet, the authorship question has persisted over the centuries.  This documentary film, "Last Will. & Testament," offers educators and students of drama, history, theatre, humanities, and the English language a unique opportunity to examine the various theories about the authorship question and encourages students' critical thinking.  More importantly, the film promotes debate on the subject so educators, students and scholars can begin to develop their own opinions on the controversy.

The documentary screening was a big success with most of the audience staying after the film for the Q&A session which lasted almost 45 minutes.  Door prizes were handed out at the conclusion of the Q&A session.