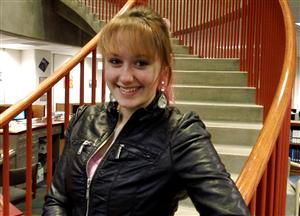 Over 165 students participated in preliminary competitions in Kansas City area high schools as well as a competition for homeschool students sponsored by the Heart of America Shakespeare Festival.  Makenna, left, impressed the judges and captivated the audience with her performance of Phoebe from Shakespeare's As You Like It and her recitation of Sonnet 24.  She will go on to represent ESU's Kansas Branch as a semi-finalist at the National Shakespeare Competition held at Lincoln Center in New York City on May 5, 2014.  The ESU Kansas City Branch is one of 58 Branches competing in the National Shakespeare Competition in New York.

2014 not only marks the 30th year for the Kansas City Branch's Shakespeare Competition, the branch also celebrated the Bard's 450th birthday this year with two birthday cakes for all students and guests attending the Competition.

Makenna's First Place prize package from the Kansas City Branch included a check for $150, a full scholarship to the Shakespeare Exploration, one of several camps offered by the Heart of America Shakespeare Festival's  Education Department, a Certificate of Appreciation and an engraved First Place Medallion.

Makenna will be awarded an all-expenses-paid trip to New York City for the final stage of the Competition.  She also receives two full days of educational and cultural activities, including an exclusive acting workshop at New York University's Tisch School of the Arts and a visit to the William Shakespeare statue in Central Park.  Perhaps best of all for Makenna will be the opportunity to spend a weekend with other ESU Branch winners from across the country who share her love of the Bard and his works.

During the judges' deliberations to select the first, second and third place winners, the 2012 First Place winner, Elizabeth Hix, was invited to give a talk about her experiences winning the Competition in the branch finals and traveling to New York City to compete with 58 other branch winners in the ESU National finals.  In addition, Jeff Schnabel, KC Branch president, presented all sponsoring high school teachers with a Certificate of Appreciation for their dedication, commitment and efforts in supporting the Shakespeare Competition.

The three judges chosen to select the First, Second and Third place winners were all highly qualified professionals in their fields.

Sidonie Garrett--Sidonie is the Executive Artistic Director of the Heart of America Shakespeare Festival. Prior to joining the Festival, she worked as a freelance director. Her experience working with new plays took her to New York City, where she directed the off-off-Broadway production of Thanatos. For the Shakespeare Festival she directed The Taming of the Shrew, Hamlet, Julius Caesar, Much Ado About Nothing, Twelfth Night, Romeo and Juliet, Merry Wives of Windsor, Othello, King Richard III, Macbeth, Antony and Cleopatra and A Midsummer Night's Dream in rotating rep and last season's As You Like It.  Sidonie has directed productions at The Coterie Theatre (including The Macbeth Project and the U.S. premiere of After Juliet), the American Heartland Theatre, KC Rep's Second Stage and The Unicorn Theatre.  She directed holiday programs with the Kansas City Symphony, Falstaff and The Marriage of Figaro for Civic Opera Theatre andhas directed productions at UMKC, KCKCC and Avila University.  Sidonie directed original presentations;  Play On! A Collaboration of Music and Words and Marriage of True Minds, with the Bach Aria Soloists.  She is currently directing Other Desert Cities at the Unicorn Theatre and will direct The Winter's Tale for the Festival, playing June 17 – July 6, 2014.

Robert Gibby Brand—Robert is a member of Actors Equity Association, has been an actor with the Heart of America Shakespeare Festival for ten seasons and was seen in As You Like It, Much Ado About Nothing, Twelfth Night, King Lear, King Henry V, The Tempest, Hamlet, Othello, King Richard III and most recently in Antony and Cleopatra and A Midsummer Night's Dream.  Robert is a familiar figure on Kansas City stages, seen in Kansas City Actors Theatre's The Birthday Party and at the MET in M. Butterfly, The Seagull and Pride and Prejudice.  He has performed in productions at Kansas City Repertory Theatre, the Unicorn Theatre, and at the Lyric Opera of Kansas City and was part of the Festival's fall program with the Bach Aria Soloists, Marriage of True Minds; a collaboration of words and music.  Robert will be seen on the Festival stage in the summer 2014 production of The Winter's Tale.

Jan Rogge--Jan is a member of Actors' Equity Association and has been a company member for 10 seasons of the Heart of America Shakespeare Festival where she was seen in A Midsummer Night's Dream, Merry Wives of Windsor, Othello, Hamlet, Twelfth Night, Macbeth and King Lear.  She has appeared frequently at the Unicorn Theatre including Miss Witherspoon, The Clean House, Bug (The Pitch's "Best Actor Award"), Marvin's Room, Unidentified Human Remains and Frankie & Johnny in the Claire DeLune.  Jan also appeared in Good People, a co-production with Kansas City Actors Theatre for whom she's performed in Who's Afraid Of Virginia Woolf? and Marion Bridge.  Jan has worked at the Kansas City Repertory Theatre, American Heartland Theatre, The MET, Okobojie Theatre and for Ground Zero Productions.  Her regional Shakespeare credits include Illinois Shakespeare Festival (The Winter's Tale, Romeo & Juliet), North Shore Music Theatre (Macbeth), Cornell University (Hamlet), Utah Shakespeare Festival (Pericles, Twelfth Night, Henry V), and Old Globe Theatre (Coriolanus).  Jan is currently in rehearsal, under the direction of Sidonie Garrett, for Other Desert Cities at the Unicorn Theatre and will be is seen in summer 2014 in the Heart of America Shakespeare Festival's production of The Winter's Tale in Southmoreland Park.

The ESU Shakespeare Competition is designed to develop students' speaking and critical thinking skills while they explore the beauty of the language and the timeless themes in Shakespeare's works.  By preparing a monologue and sonnet for public presentation, students bring Shakespeare to life in their own way and learn to express his works with understanding, clarity and feeling.

Click on the "Photo Gallery" at the top to see photos from the Kansas City Branch Competition.