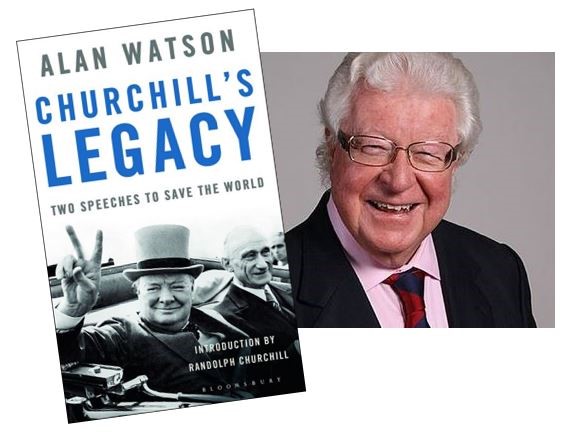 The Rt. Hon. Lord Alan Watson, award-winning BBC broadcaster, Vice President of the English-Speaking Union of the Commonwealth (UK), and acclaimed author, will give a lecture on Friday, November 10, 2017, and Saturday, November 11, 2017, at Anna Marie's Teas in Liberty, MO. Both lectures will be preceded by a full English Tea. Lord Watson's lectures and teas are sponsored by the English-Speaking Union, Kansas City Branch. The public is cordially invited to attend this lecture and tea program. Details below. 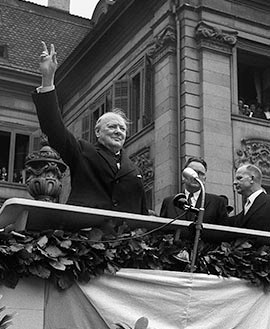 Lord Watson's lecture is inspired by his newly published book, "Churchill's Legacy: Two Speeches to Save the World." He will describe how Winston Churchill wielded his influence in post-war politics to enable the restoration of Europe through two key speeches in 1946. Having first helped bring victory to the Allies in 1945, Churchill went on to preserve the freedom of the world by gaining the support of the United States in the restoration of Europe.

He will explain how Churchill's "iron curtain" announced the beginning of the Cold War and changed the way the Western world viewed communism. He will describe the resulting controversy and explain how these speeches were integral to the emergence of NATO and the Marshall plan, committing the U.S. to Europe's economic recovery and foreshadowing the EU today. Lord Watson will also show how these two speeches presented a new prospect of recovery and hope – both for Churchill as a political pioneer, and for the rest of the world.

Cost: $35 per person for lecture and English Tea program including tax and gratuities.

Or Pay by Check:

Please mail your check to arrive no later than November 1, 2017.

Book Signing: Lord Watson's book, "Churchill's Legacy: Two Speeches to Save the World" will be available for purchase. A book signing will follow the lecture.

Friends and Guests:  We welcome friends and guests so please bring your friends. We encourage you to purchase your tickets as soon as possible so you won't be disappointed.

Parking:  Parking is limited around Bohnet House.  Please carpool where possible.  If anyone wants to use their car to carpool to reduce the number of cars, let us know and we'll pass along information so members can contact the carpool drivers to make pick up arrangements.

Alan Watson has been an award-winning BBC broadcaster for over 20 years. He is Chairman of CTN Communications which is acknowledged as a pre-eminent multi-media, consultancy, and production company.

He is an accomplished author, whose publications include Europe at Risk, The Germans: Who are They Now?, The Queen and the U.S.A. and his most recent book Churchill's Legacy: Two Speeches to Save the World (Bloomsbury, 2016).