ESU Goes to the Movies 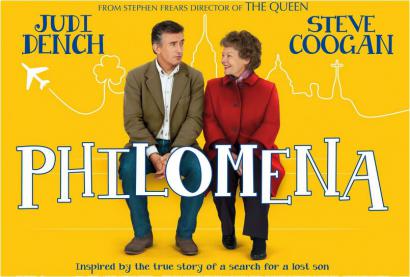 ESU members were treated to a wonderful film starring Judy Dench and Steve Coogan with two showings on Dec. 8 and 9, 2013.  Philomena, directed by Steven Frears who also directed The Queen and Dangerous Liaisons, is the true story of one mother's search for her lost son. It is rated PG-13.

Based on the 2009 investigative book by BBC correspondent Martin Sixsmith, The Lost Child of Philomena Lee, PHILOMENA focuses on the efforts of Philomena Lee (Dench) to find her missing son.  She is the mother to a boy conceived out of wedlock - something her Irish-Catholic community didn't have the highest opinion of - and given away for adoption in the United States.

In following church doctrine, she was forced to sign a contract that wouldn't allow for any sort of inquiry into the son's whereabouts. After starting a family years later in England and, for the most part, moving on with her life, Lee meets Sixsmith (Coogan), a BBC reporter with whom she decides to discover her long-lost son.

The film is a compelling narrative of human love and loss and ultimately celebrates life. It is both funny and sad and concerns two very different people, at different stages of their lives, who help each other and show that there is laughter even in the darkest places.

ESU members attended two showings of the movie at AMC Ward Parkway 14 Theatres.  It was a fascinating and captivating movie and enjoyed by everyone.