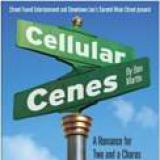 Each scene was set at a different Downtown Lee's Summit, Missouri location...a suburb of Kansas City...and for this particular show it was important for the audience members to leave their cell phone on!

Ben Martin, who wrote and directed "Cellular Cenes," is an ESU member and board member. Ben has been an ESU member for 14 years including past treasurer and retired from teaching high school theatre after 34 years, 18 of which were in the Lee's Summit School District.

There were two performances each on August 10 and 24, 2012.  It was a fun and unique evening of theatre for ESU members and guests.