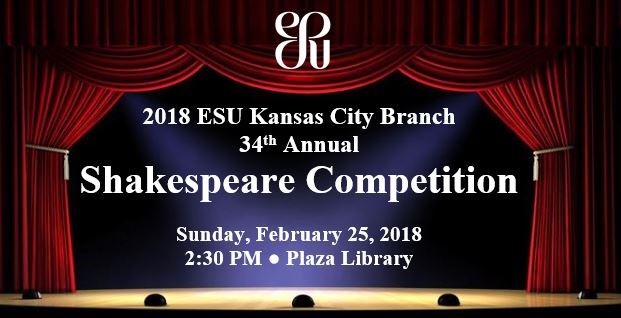 The Competition provides teachers with a performance-based program for the study of English Language Arts and Shakespeare. High school students recite Shakespeare's monologues and sonnets and compete for the chance to win a trip to New York City to compete in the ESU National Finals at Lincoln Center.

Through the Competition, students develop communication skills and an appreciation of the power of language and literature. The Competition has engaged more than 300,000 young people since its inception in 1983.

The First Place winner of the ESU Kansas City Branch Competition receives $150, a full scholarship to Shakespeare Exploration, a conservatory-styled camp for teens offered by the Heart of America Shakespeare Festival, and an all-expense-paid round-trip to New York City to compete in the ESU National Shakespeare Competition on April 23, 2018, at Lincoln Center as well as other group activities in New York City.

Deborah McArdle, ESU Kansas City Branch's Shakespeare Competition Coordinator, commented, "We are pleased to have some new schools that have never been in the Competition as well as schools who have participated for many years. The Competition is a valuable teaching tool and gives students the opportunity to develop better communication skills and an appreciation of the power of language and literature."

All high schools in the Kansas City metro area are invited to participate in the Shakespeare Competition. To learn more and register for the Competition, please click here. You may also contact Deborah McArdle at (913) 492-8753 or  dhmc2@att.net.

The ESU National Shakespeare Competition has been recognized by the Globe Center (USA), the Children's Theatre Foundation of America and the American Academy of Achievement. Many distinguished judges have served on the Competition panels.