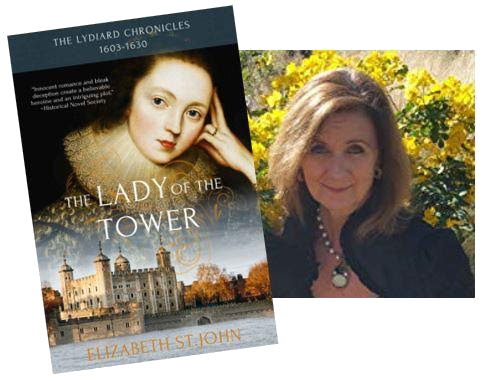 The ESU Kansas City Branch was host to best-selling author, Elizabeth St. John, who made a one-day visit to Kansas City. Her historical fiction novel, The Lady of the Tower was the topic of her lecture at the Kansas City Public Library on Wednesday, March 11, 2020.

Elizabeth, Dan, Ginnie and Jeff toured the special Queen Nefertari Eternal Egypt exhibition at the Nelson Museum. Rozanne Klinzing, a Nelson docent specializing in Egyptology and the Queen Nefertari exhibit, was the tour guide for the group. Elizabeth also visited the Nelson's Starr Miniature Portraits which is one of the largest miniature portraits in the U.S. some dating to the late 16th century. She also saw some the Nelson's collection of  European Dutch Impressionists as well as Nelson's world-famous Chinese art collection which is the largest Asian collection outside China.

Elizabeth's talk at the Kansas City Public Library was well received and the audience asked a variety of questions during the Q&A. Elizabeth signed copies of her books after the program.

The ESU Kansas City Branch held a "Meet and Greet the Author" Buffet Reception Fundraiser after her talk at the library. The Fundraiser was held at Banksia Bakehouse Café which has an Australian cuisine influence in a European-style café setting.

The café is well-known in Kansas City and was featured on the Food Network TV Show, Diners, Drive-ins and Dives The menu included classic meat and vegetable pies, sausage rolls, grilled vegetables, two salads and Australian pavlova for dessert.


Elizabeth's short visit included a hotel night at 21c Museum Hotel in downtown Kansas City. The hotel is one of nine boutique hotels in the U.S. each displaying a collection of contemporary art by local and national artists. The nine hotels' art collection in total represents one of the largest contemporary art museums in the U.S. and North America's only collecting museum dedicated solely to art of the 21st century.