A Message from the Chairman,
English-Speaking Union of the United States
Ambassador Paul Beresford-Hill, CBE 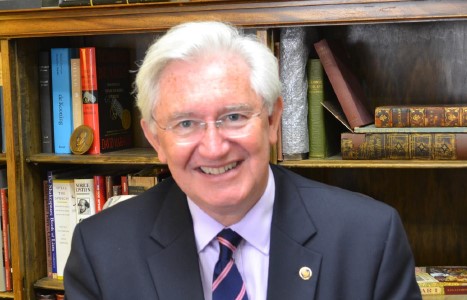 Dear Members and Friends of the ESU of the US,

When I was about five years of age my parents moved from Dublin to a part of south London called Lewisham. We lived in a small terraced house. My friends on the right were originally from Cyprus, and on the other side, the family was Trinidadian. We were the Irish Catholics in the middle and we were all immigrants. That's what formed our collective identity, and we knew, going to school together, playing in the street, going to the Saturday Films at the local cinema, that we could depend on each other when other children derided us because of our accent or our color. Racism and intolerance are nothing new to humanity, and neither is our collective will to overcome it and seek harmony and peace with each other.

Shortly after my arrival in New York as a teacher, back in the early 1970's one of my students drove me to the South Bronx. He was African American, and he wanted to show me 'the other side' of New York. I was shocked, horrified, disgusted by what I witnessed. The broken and burnt out facades of what were once homes reminded me of photographs, I had seen of war-torn Dresden or London after the blitz. What was worse were the haggard faces of black and Hispanic men and women gathered around flaming braziers on the street corners, many of them clutching children trying to keep warm. The destruction and misery seemed to go on forever and, although all of that has since changed in the South Bronx, the images I saw that day are an indelible reminder of the evils of social inequality.

The English Speaking Union was created from the ashes of war and destruction to help build a better world through fellowship and communication, using the tools available to us – the incredible generosity of people of goodwill, the advantages of quality education and the opportunity for student and adult exchange. The ESU, as an international organization enjoying NGO status at the United Nations, has obligations and responsibilities beyond the boundaries of our nation-states and each of us needs to bear witness to the fact that injustice and suffering transcend political boundaries. The demonstrations against racism in London, Paris, and in many other countries, in memory of George Floyd, is further evidence of the common ties that bind humanity and are a solemn reminder that we are still a work in progress.

This year we celebrate 100 years of the ESU in the United States, yet we enter our new century with stark reminders that natural disasters, combined with our own inhumanity to each other, are dominant factors shaping an uncertain future. 'Life, liberty, and the pursuit of happiness' are promises that brought me, like so many others, to America. They remain our greatest hope and require us to reach out to each other, beyond the limits of race and belief, to all our American branches, our international membership bodies, and to all those who are our neighbors. We need to remind ourselves first, then each other…that we are all created equal, as Episcopal Presiding Bishop Michael Curry reminded us, 'and in the image and likeness of God'.