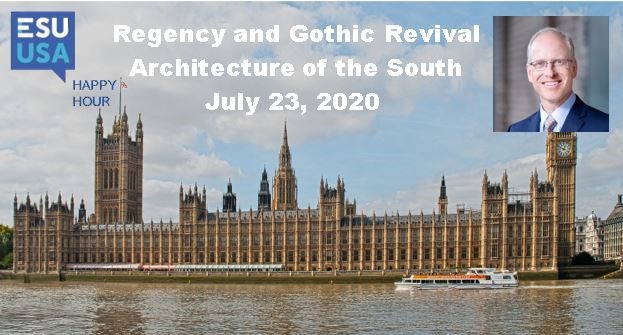 Join us for our first ESU Happy Hour on Thursday, July 23, 2020 at 3:00 pm Central Time. Happy Hour programs are free and you can register for this Happy Hour program at the link below. Our guest speaker is Robin B. Williams, PhD. He will explore the evolution and diversification of architectural styles during the Regency and early Victorian eras in England and their impact on the United States, particularly in the American South.

The early 19th century represented a period of change and possibilities for the English. An expanding empire, military success over Napoleon and growing industrialization marked the Regency era named after the Prince Regent, the future George IV.

In architecture, these forces inspired experiments with architectural style and technology. Architects not only explored new possibilities with neo-classical forms, but also a fascination -- bolstered by a mix of budding imperialism and nationalism -- with exotic places, either long ago (Greece), far away (India, China and Egypt) or from England's own remote past (medieval castles and Gothic heritage). The various stylistic revivals that emerged greatly diversified the design vocabularies used by architects, reaching their zenith during the early Victorian years of the mid-19th century.

Click here to register for this ESU Happy Hour. After you register, you will receive an email with instructions on how to connect using Zoom on July 23, 2020 at 3:00 pm Central Time. Happy Hours are open to all ESU members, friends and guests. Feel free to share these programs with anyone you think would enjoy the Happy Hour topics.