Join Our Next Happy Hour:
Mad, Bad and Dangerous to Know:
The Brontë Sisters
Wednesday, August 5, 2020 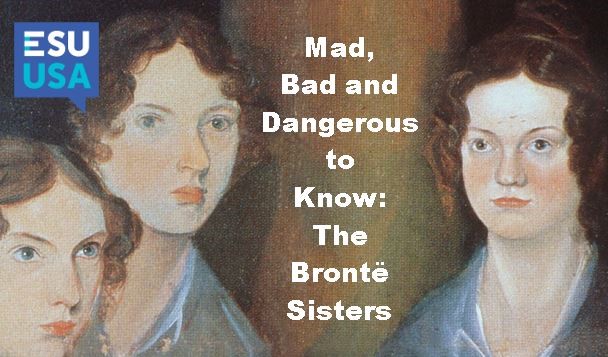 Charlotte Brontë (1816-1855)  and her sisters Emily Brontë (1818-1848) and Anne Brontë (1820-1849) have charmed, inspired, and even shocked readers from the Victorian age to the present.  Raised in Haworth, Yorkshire, the three sisters produced such classics as Jane Eyre, Wuthering Heights, and The Tenant of Wildfell Hall.  Influenced by British Romantic poets like Wordsworth, Scott, and Byron, the Brontës produced a cast of unforgettable characters such as the devoted governess, Jane Eyre, and the lovers, Heathcliff, Cathy, and Hareton.

In her Happy Hour session, Marie Kervin will scrutinize the pearl of received wisdom that sisters Charlotte, Anne, & Emily were mild, decorous examples of Victorian womanhood. This lecture will explore the themes of domestic violence, opium addiction, extramarital affairs, alcoholism, necrophilia, sadism and coercive control apparent in the sisters' work. We will be debunking the myth.

Click here to register for this ESU Happy Hour Program.

About the Speaker: Marie Kervin

Marie grew up in the heart of the beautiful Lake District in northern England, the land of Wordsworth, Southey, and Tennyson.When Marie's twins were 3 years old, they all moved to the West Coast of Ireland, where Marie worked from Galway University, compiling a collection of autobiographical writing and artwork in a book called 'Living Scenes.'

Her next adventure is in Jacksonville, Florida where she lives with her husband, twins, Emily and William, and rescue dog, Cassie.