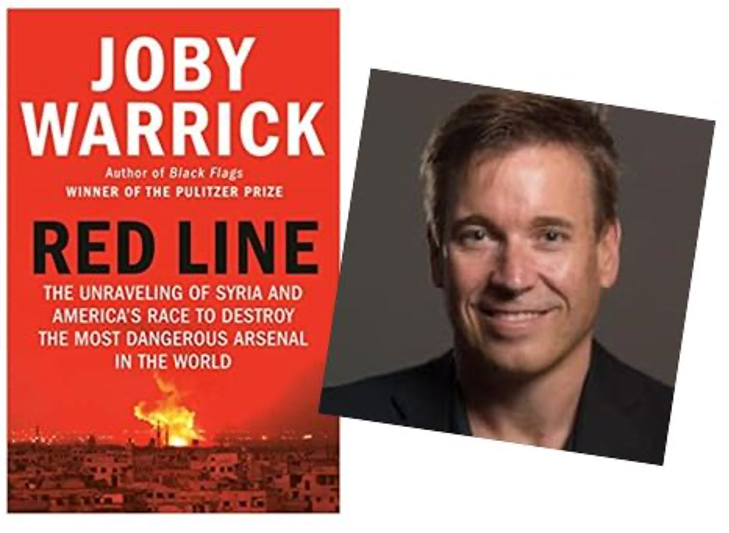 The true story of the most daring disarmament feat of modern times.

ESU's next Happy Hour features best-selling author and two-time Pulitzer Prize winner, Joby Warrick who has written the true story of the most daring disarmament feat of modern times. Join ESU members and Friends on Wednesday, May 12 at 3:00 pm for this fascinating ESU Happy Hour program. It's a free online program but registration is required.

Warrick's story is a  character-driven narrative with a cast of heroes and villains, including weapons hunters, politicians, doctors, diplomats, and spies. Drawing on astonishing original reporting, Warrick reveals how the United States embarked on a bold adventure to prevent one catastrophe but could not avoid a tragic chain of events that empowered America's enemies.

In August 2013, a horrific poison-gas attack against Syrian civilians presented the United States with an unexpected opportunity: A chance to snatch away a vast trove of highly lethal chemical weapons that was at imminent risk of being stolen by ISIS or commandeered by pro-Iran militants.

A deal was cut with Russia, and the race was on to extract the weapons from depots across Syria, in the middle of a brutal civil war. Then, when no country would take the poisons, American engineers turned an old ship into a floating industrial waste factory and destroyed the chemicals at sea, while a flotilla of activists gave chase. The disarmament feat, which involved more than a dozen nations, was one of the last great acts of multilateralism. But as author Joby Warrick explains, the events also reveal the limits of Western power and highlight the erosion of crucial international norms that have helped preserve order for 75 years.

Joby Warrick is a best-selling author and a national security correspondent for The Washington Post. A two-time Pulitzer Prize winner, he served for 24 years with the Post's national and investigative staffs, reporting from Washington and scores of cities around the world. For more information, click below.