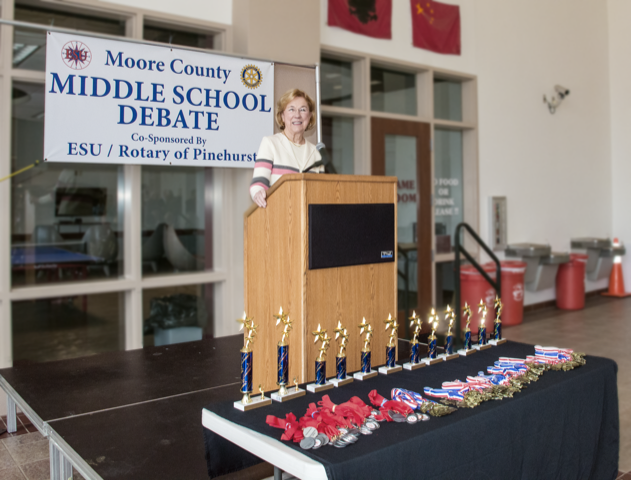 "I joined the debate club last year as kind of a joke," said Alex Simpson, a seventh grader at Elise. "My family has always said that they can argue with a fence post all day until they get their way. I'm really passionate about arguing; I like to get my point through, and this debate competition is a great way to let your voice as an individual be heard."

In teams of two, the 84 participants drew on months of research along with their own argumentative acumen over four rounds of competition. Each team came with their computers or thick binders of notes, prepared to argue either side of the issue as determined by a coin flip at the beginning of each round.

E-SU members, Pinehurst Rotary members and students from the Pinecrest speech and debate team judged each team on delivery of their positions, the strength of their argument and sources, and how well they undermined their opponents.

"if you stutter they're going to take down some points," said Eli Isbeli, a sixth grader at New Century fresh off a victorious second round. "If your opponents are just defending themselves and not attacking, then you get points. When you win it feels so great. You see me smiling right now because it's just such a fun feeling."

"It's a lot easier to affirm — we did negate the first time and lost that one," said his partner Kaleb Gordon, also a sixth grader. "Percentages are really good. Whenever you're citing your evidence, if you don't have percentages you're going to lose."

The idea of speaking in front of strangers, let alone being literally judged by them, made Bailey Voight's heart race and palms sweat when she was a sixth grader at West Pine. But two years later and competing in debate for the third time, she and her partner Grace Baker were the top team at the end of Tuesday's tournament.

"I decided I would try out for debate and I've stuck with it because it's brought me out of my shell and taught me so much about public speaking and how to have a constructive argument," she said. "It can provide a lot of opportunities and it's a very productive thing."

West Pine had three other teams in the top six: Adrian Archer and Jake Cool in second, Matthew Goodman and Lily Wellener in third, and Claire Evans and Ayla Rodriguez in fifth. From Southern Middle, Nicole Lutz and Landon Criswell placed fourth and Amie Morales and Mimi Morales were sixth.

"I was pretty shy in sixth grade and I didn't know what I was getting myself into," said Ayla, who finds it easier to debate topics that she hasn't already formed an opinion of.

"We won third place our sixth grade year, and it kind of made me realize exactly how much I love to argue with people. I loved getting to learn about the new topics we were working on."

Debate judges do not reward biased viewpoints or ad hominem arguments. As middle school students enter a phase of developing their own opinions independent of parents and teachers, they're at the ideal point to learn how to cogently argue both sides of a position in a respectful fashion.

"It is important not to lash out in anger, but to talk calmly and collectedly when we speak to an audience," said eighth grader Adrian Archer.

"This is something that has been forgotten in the past few years in American society. It is vital that we are learning these valuable lessons in how to handle public discourse, so that we do not end up like the politicians of today… It is vital that we be an accepting community where we can talk about all ideas."