At our May 11, 2019 meeting, our guest speaker, Kevin Sweder,  took us on a journey into the cell to expose the components of DNA that are used as markers in Forensic Science.  We learned 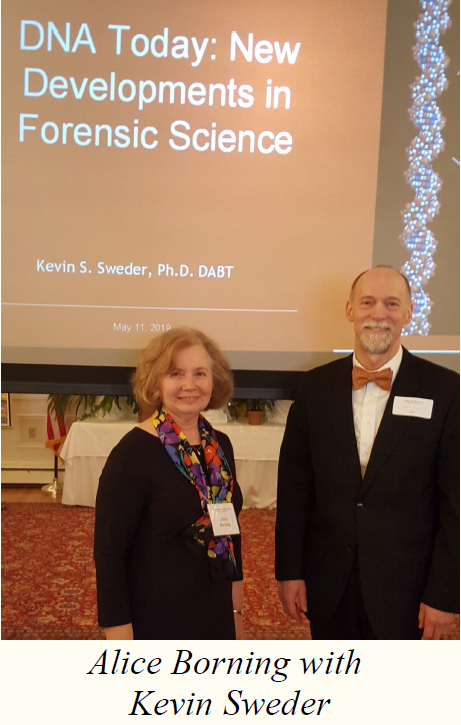 how these markers work in crime solving.  Even the DNA of twins bear differences that lifetime experiences and exposures mark on their DNA,  With his expertise in forensics and epigenetics, Kevin explained the details with Power Point slides to show complex concepts clearly.

Alice Borning, who arranged for Mr. Sweder to appear, introduced him.  Kevin Sweder is recently retired from the Syracuse University Faculty where he was the Director of the Center for Bioforensics, Biosecurity, and Biometrics. He now teaches an Honors Program. Prof. Sweder's expertise in epigenetics is being applied to the development of new biochemical tools to bolster forensic efforts. He received his PhD from Caltech, worked as an Asst. Prof. At Rutgers, specialized in Genetic Toxicology at Bristol Myers Squibb, and as professor at SU, advanced to the position of Director of Forensics and National Security Sciences. 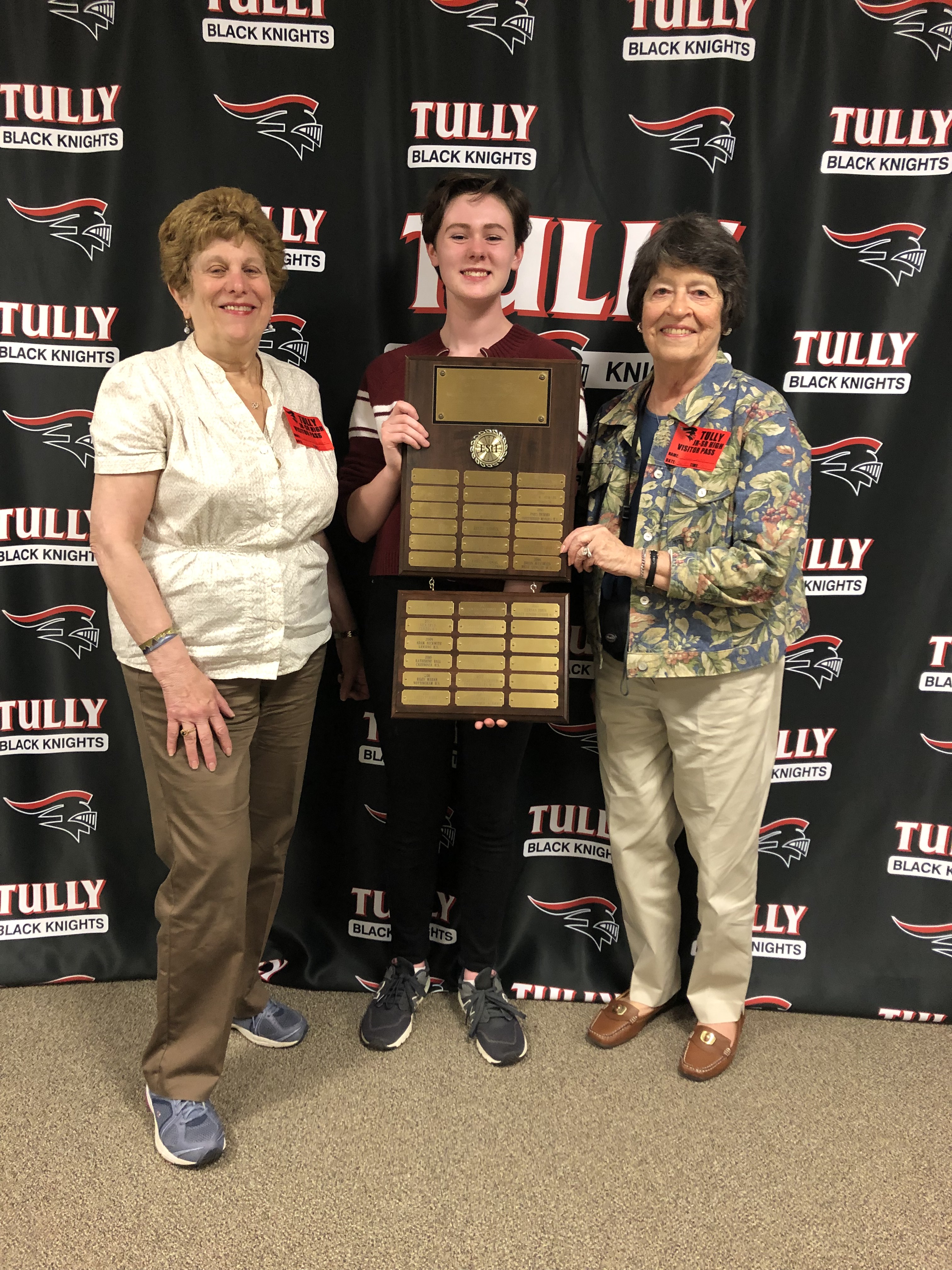 At March 2nd's English-Speaking Union-Syracuse Branch's 31st Shakespeare Competition at Syracuse Stage's Arthur Storch Theatre, winner Tiernan Tobin from Tully High School presented Shakespeare's Sonnet 50 and a monologue by Mercutio from Romeo and Juliet.  Her talent won her a trip to NYC's Lincoln Center to participate in the National English-Speaking Union's 36th competition with fifty other nationwide winners on April 29.  The prize this year is a summer acting experience in Oxford, England. 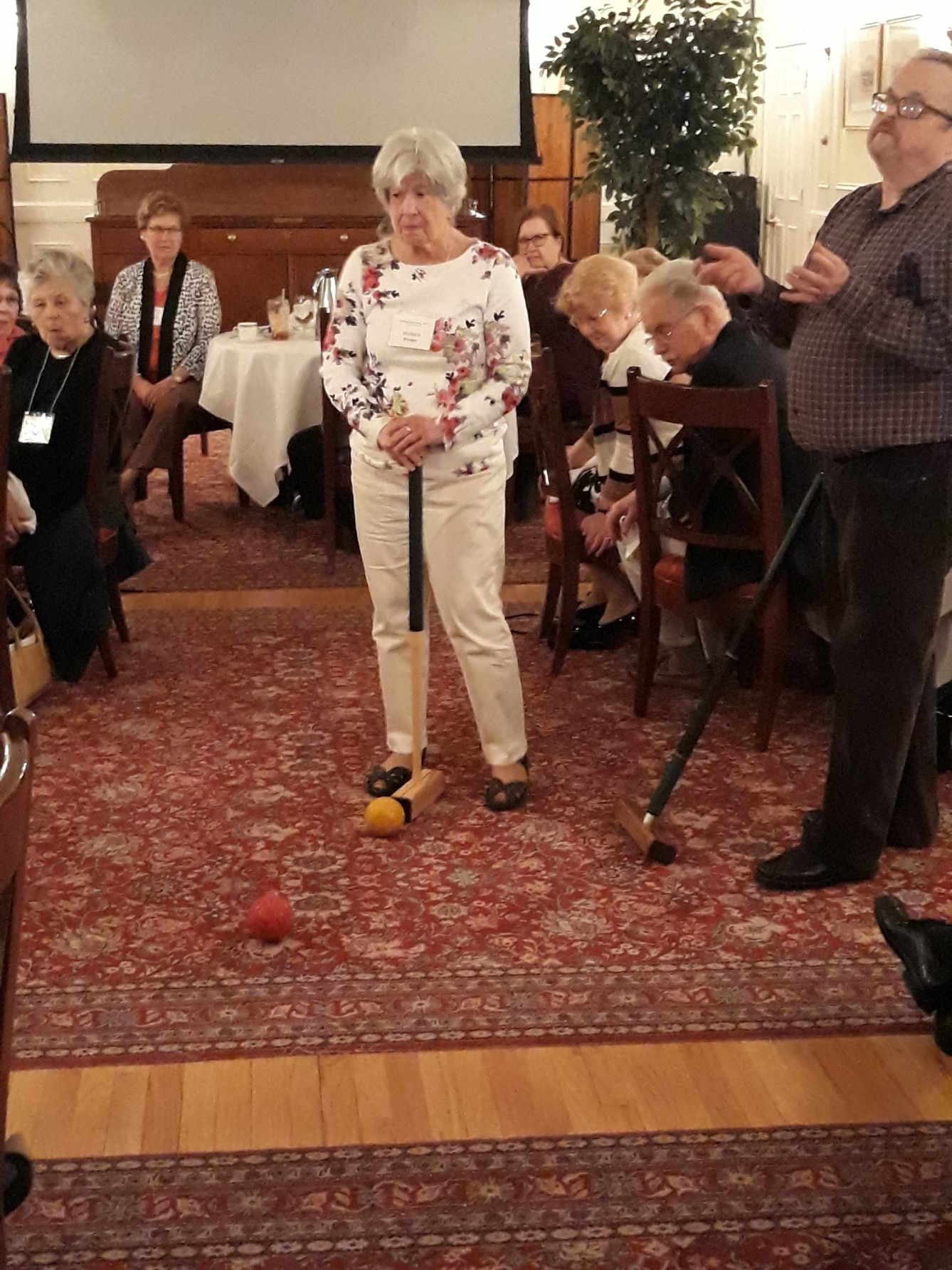 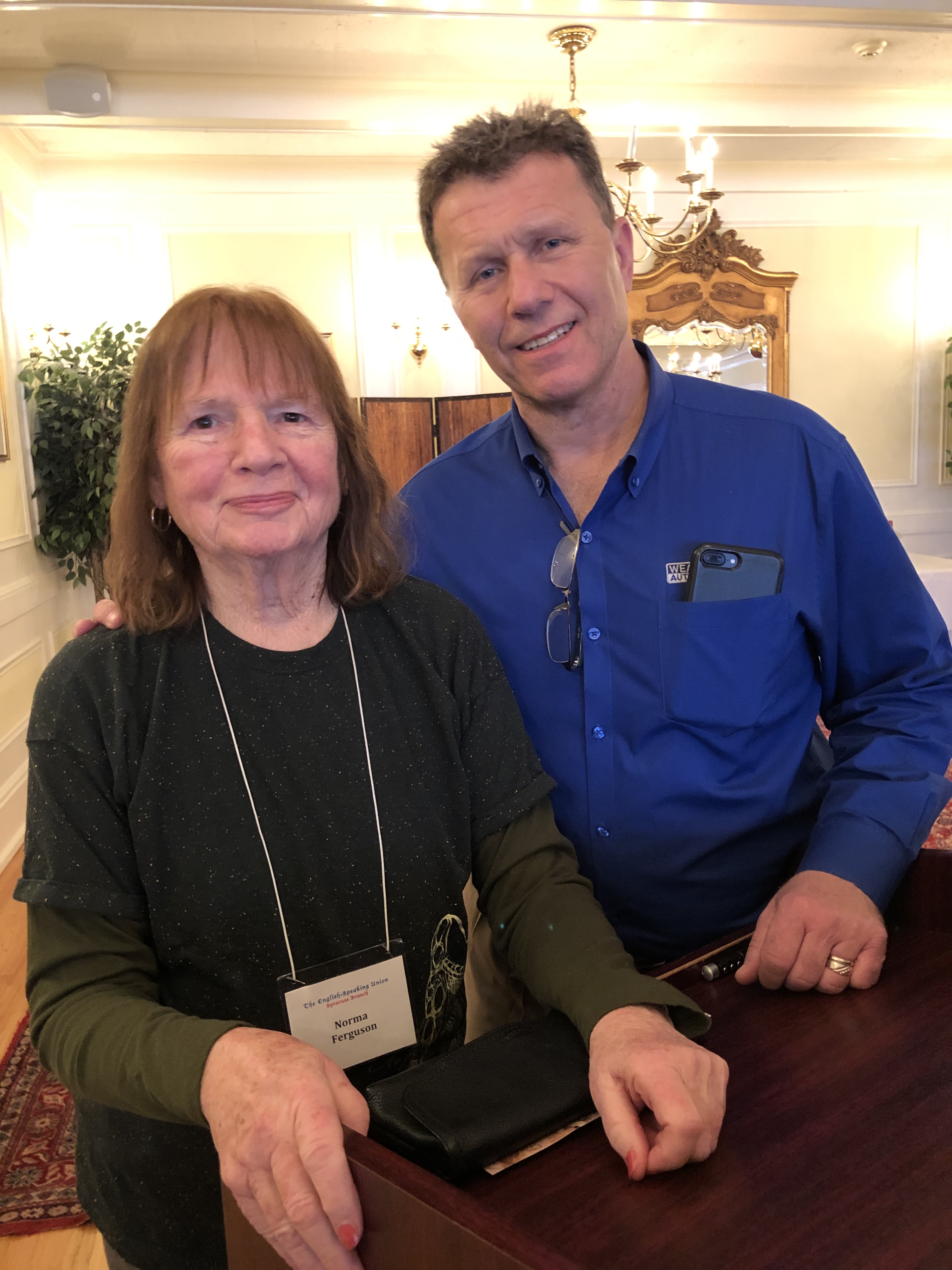 The March luncheon meeting of the Syracuse E-SU hosted TV personality Wayne Mahar, Chief Meteorologist at TV station WSTM, Channel 3. He is a well-known and recognizable figure and an expert in a field which is probably the most common topic of conversation at any gathering. After his biographical introduction, the audience participated in a lively question and answer period where Wayne responded to thoughts about climate change, TV studio structure, and his experience on The Weather Channel during this winter's windstorm. Since he is known throughout  the area, it was like having a conversation with a friend. 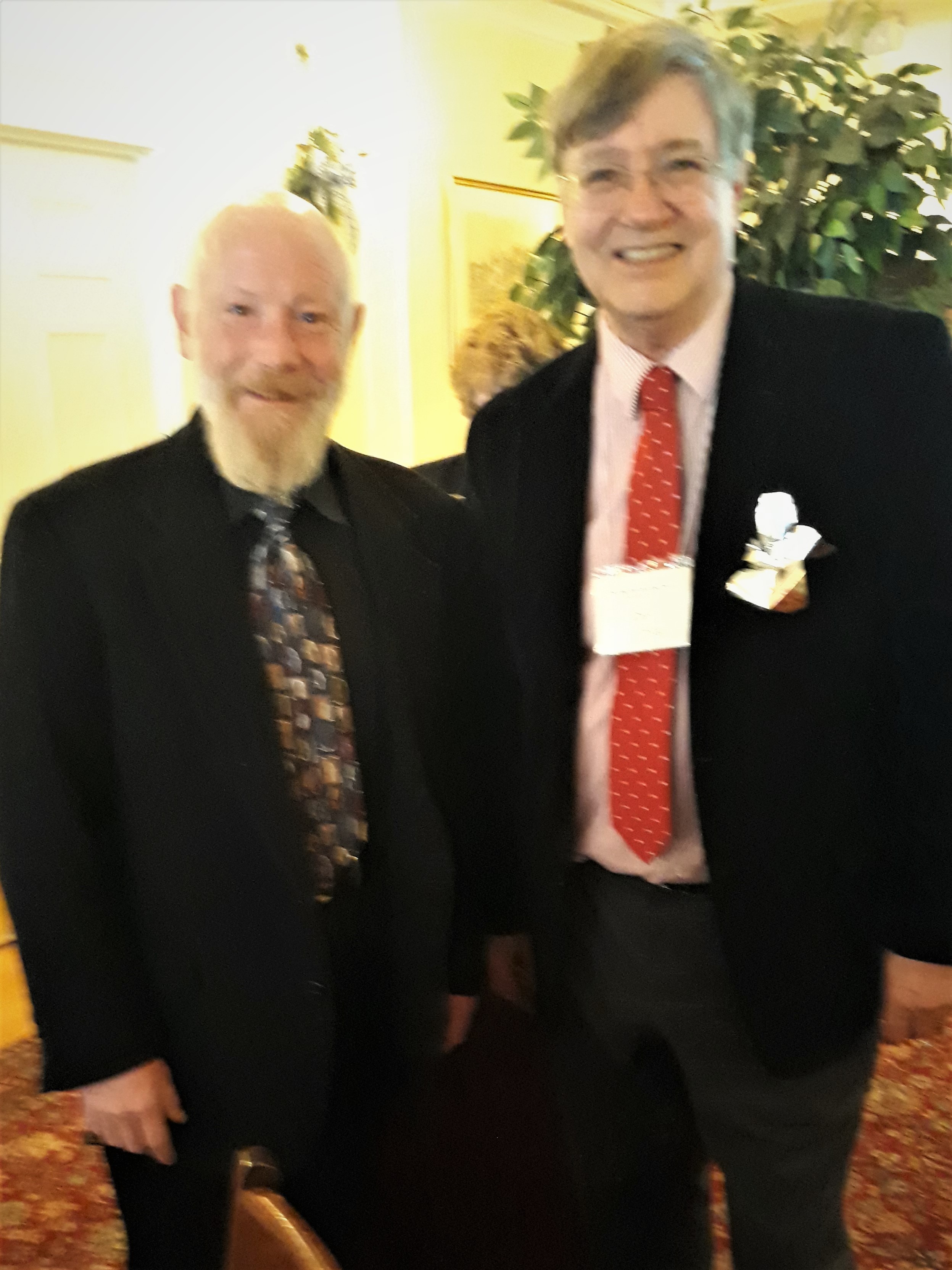 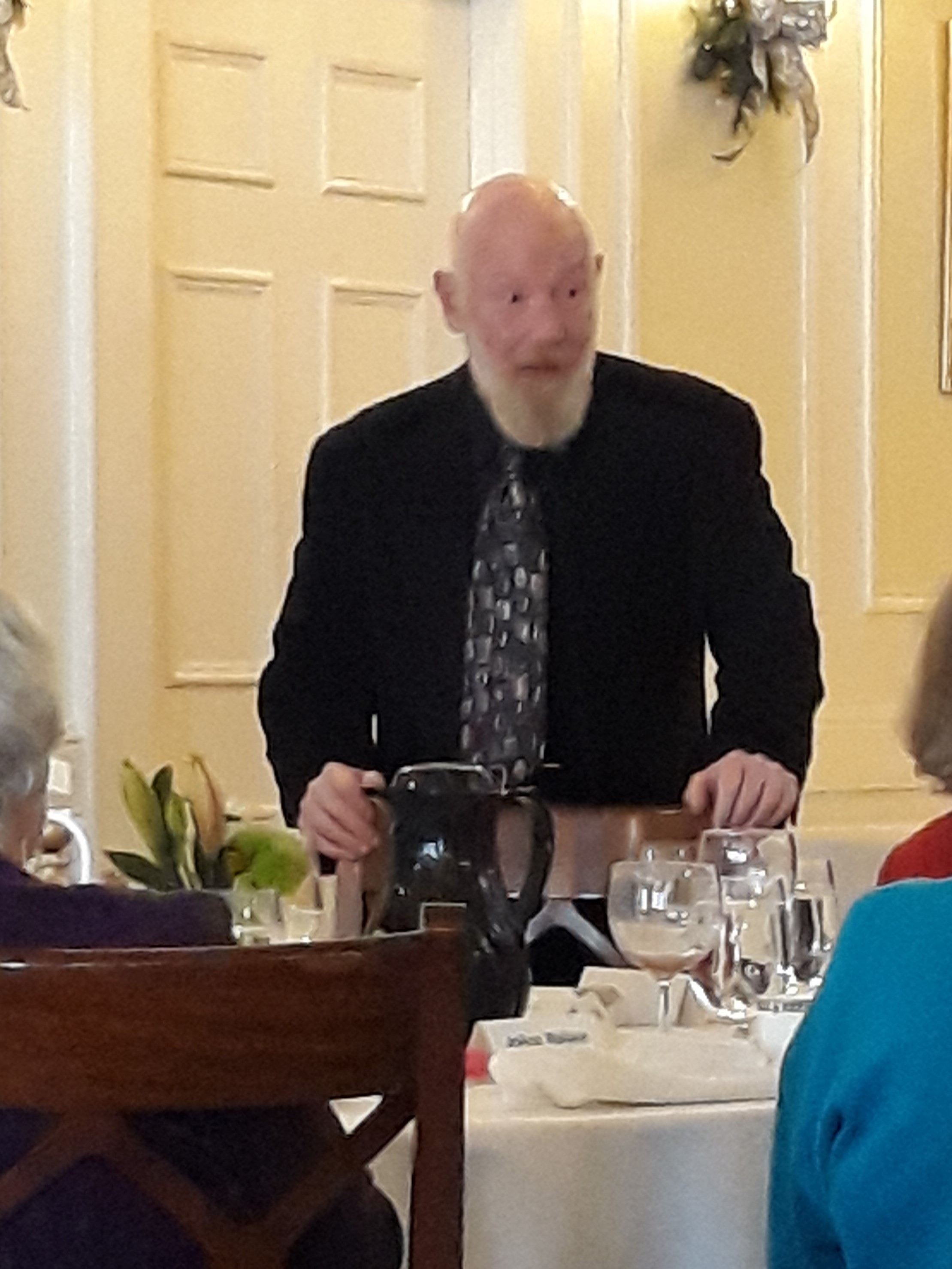 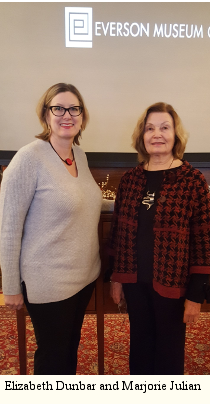 Elizabeth Dunbar, Executive Director of the Everson Museum of Art,was the E-SU of Syracuse's featured speaker at its luncheon on January 12, 2019, Marjorie Julian, who had arranged for Ms Dunbar to speak, introduced her.

The Everson Museum building, renowned as the first museum designed by the famous international architect I.M. Pei, is celebrating its 50th    Anniversary.  Ms Dunbar presented information and slides of the museum's illustrious history before and after the construction of the I.M. Pei  building.  She also described and showed important recent repairs and renovations as well as the many exhibits and community out-reach programs offered by the museum. 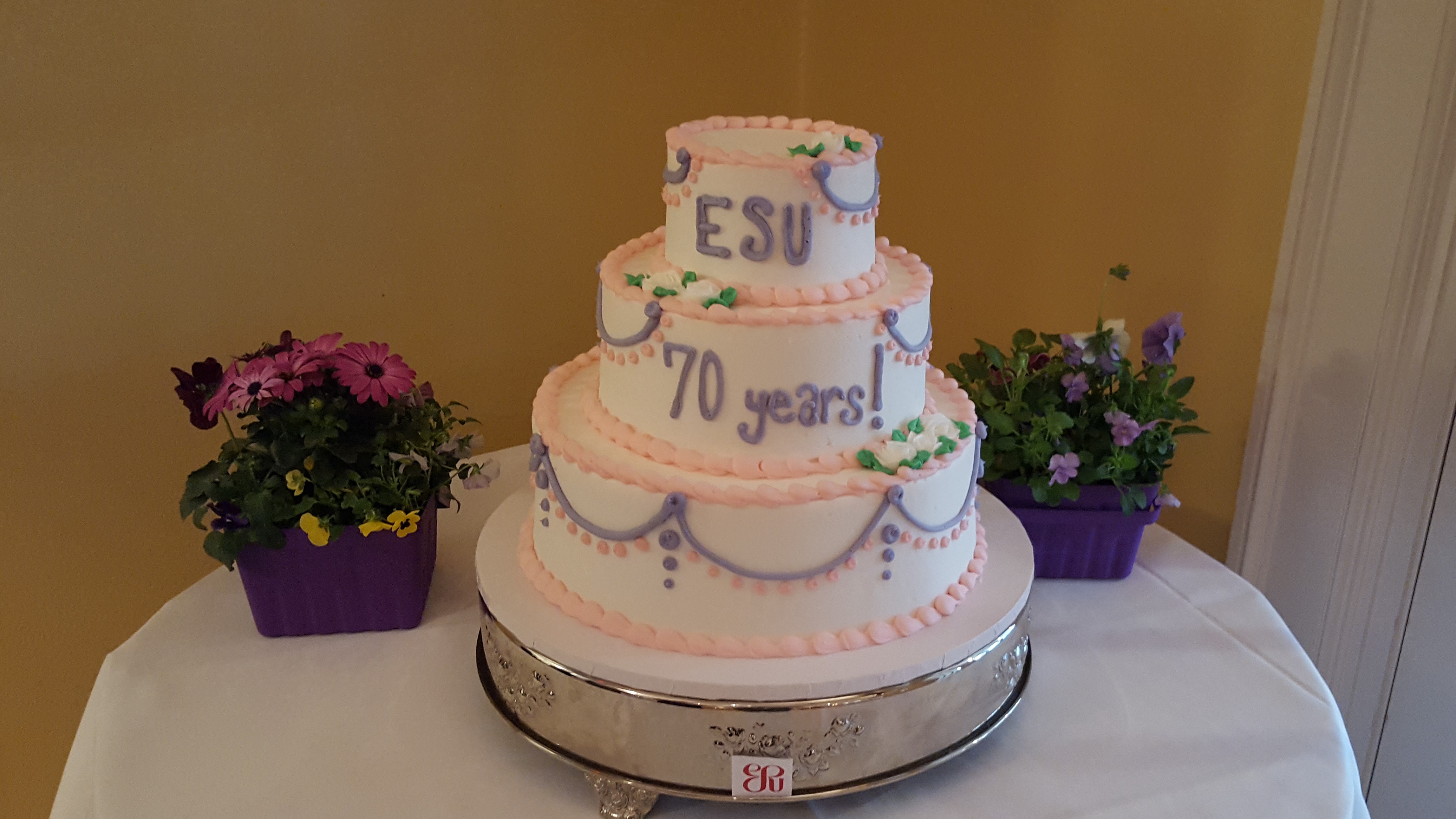 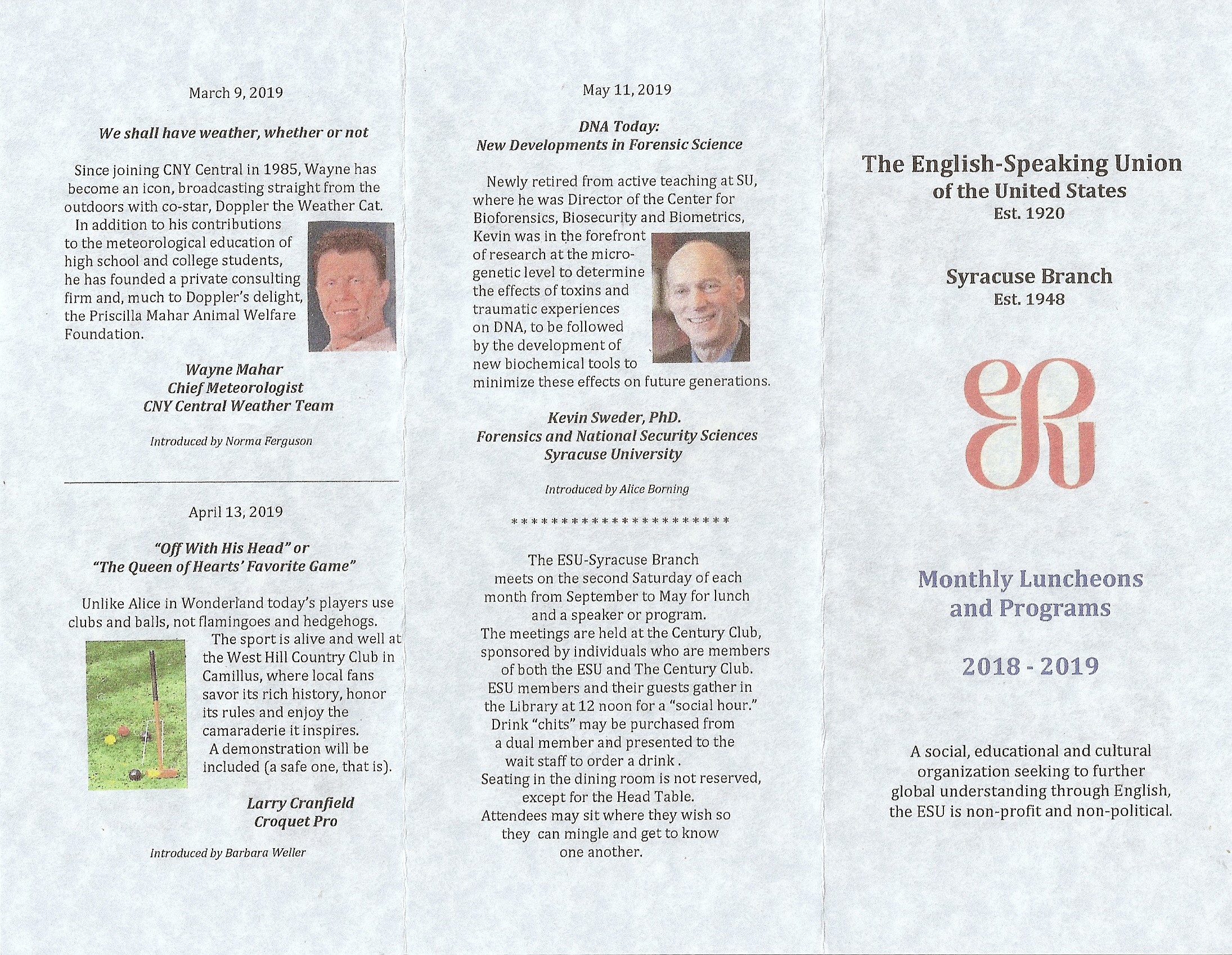 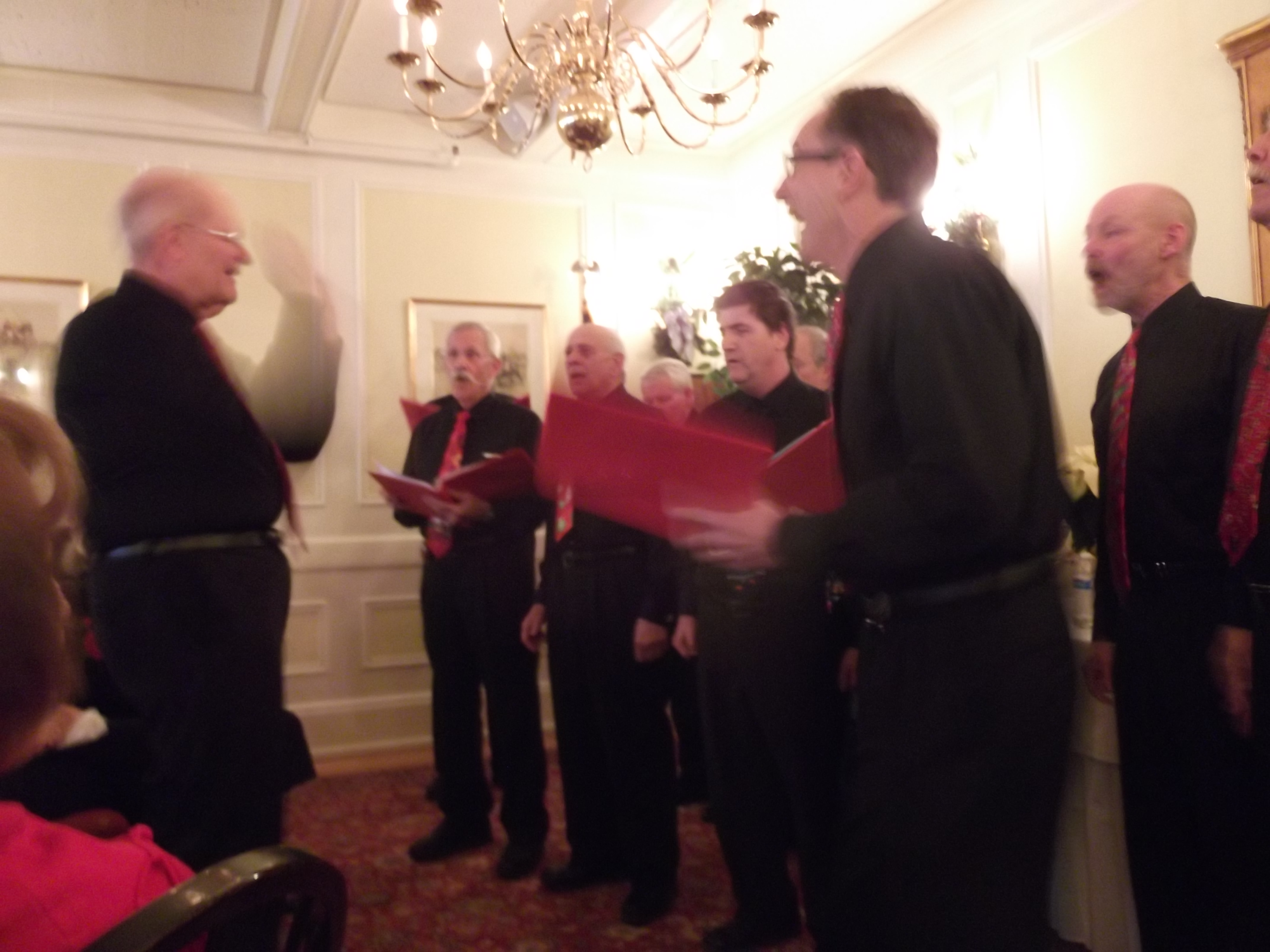 For December in lieu of a general meeting and speaker, we had a festive program with lunch and entertainment.  After a delicious meal of beef tenderloin with potato, spinach-stuffed tomato, and yule log for dessert, we were entertained by the Harmony Katz Men's Chorus with a selection of holiday songs. 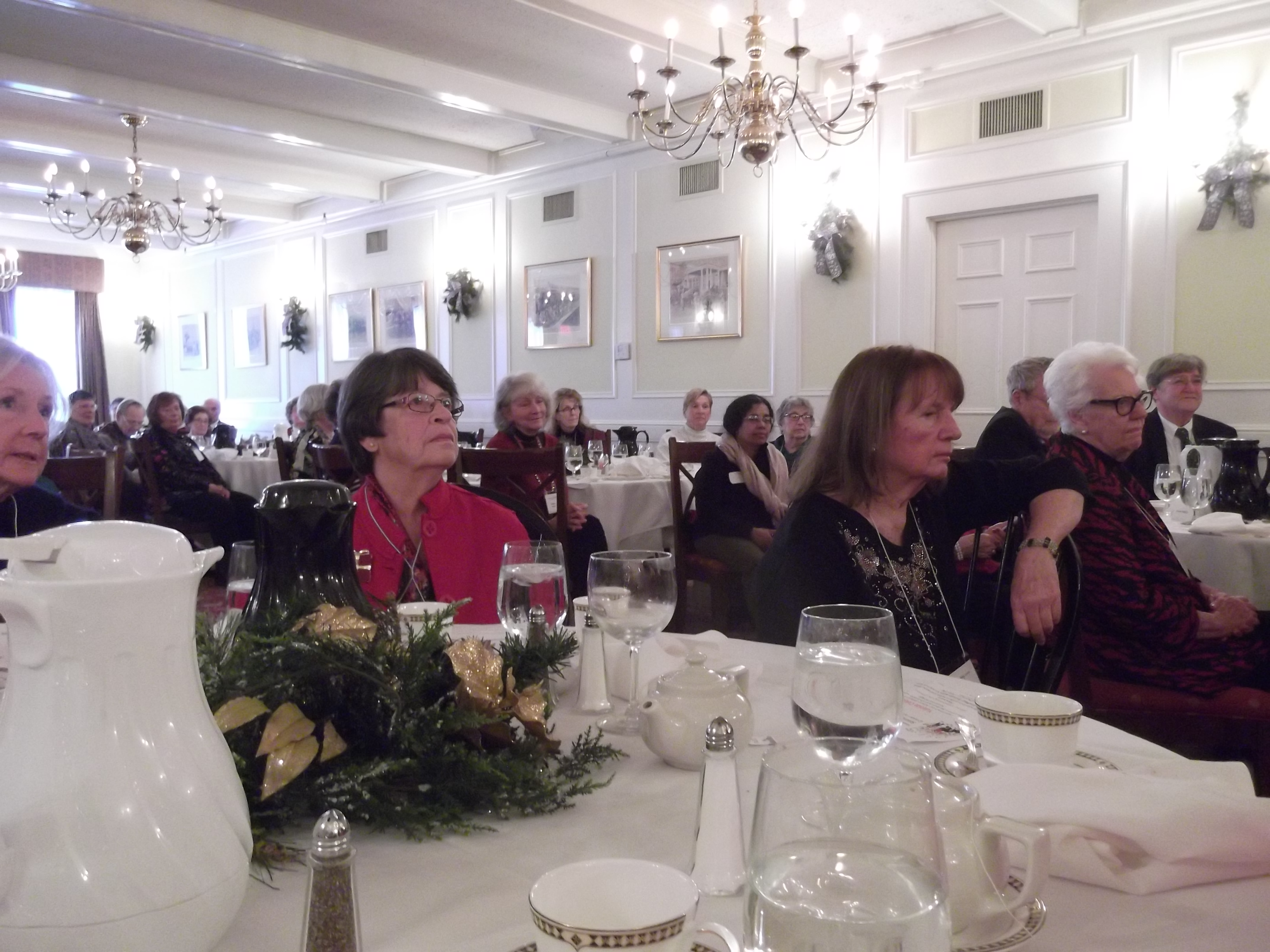 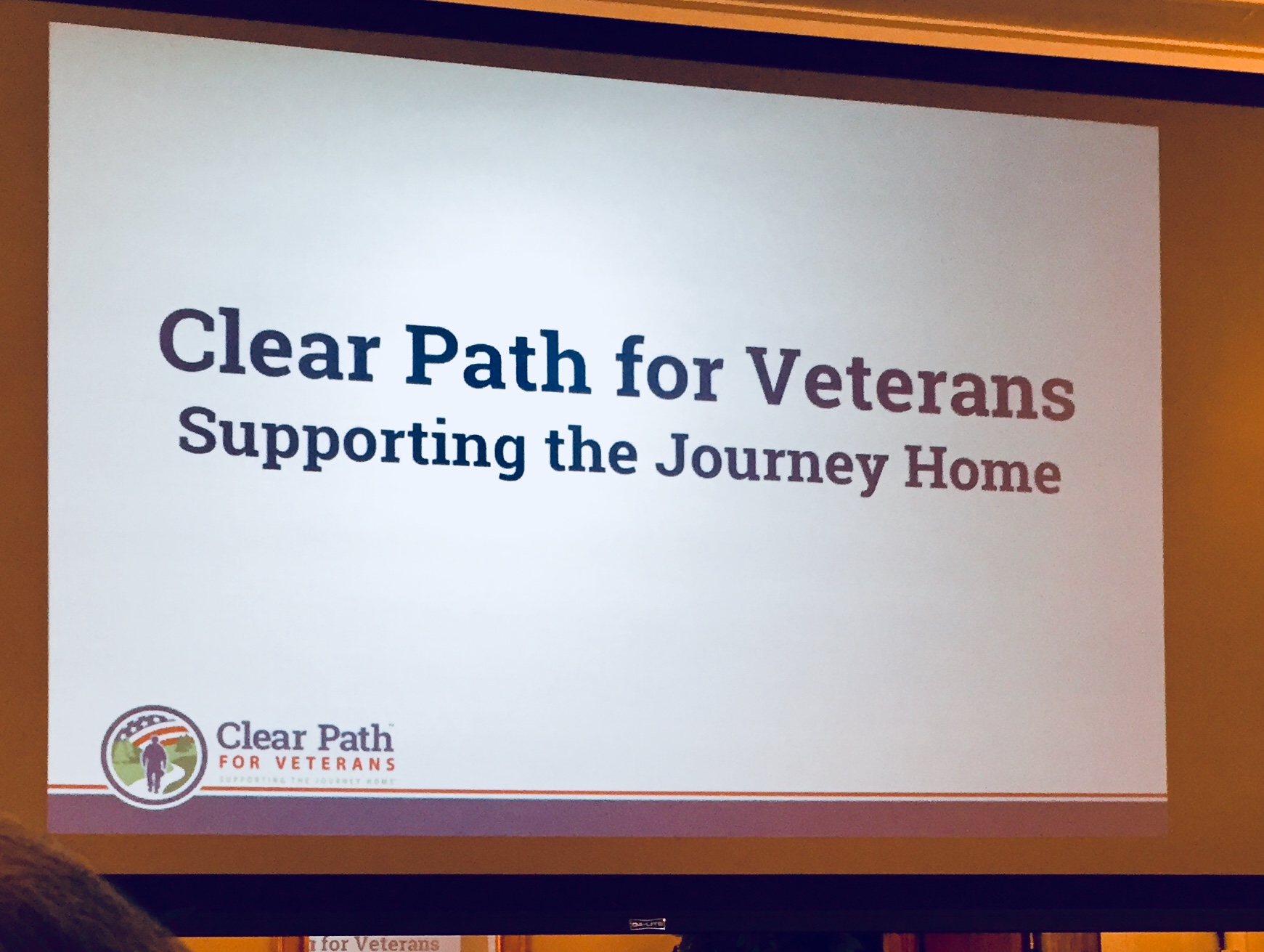 Melissa Spicer, Founder of Clear Path for Veterans, spoke about the organization's mission.  Clear Path for Veterans, a 501(c)(3) non-profit organization, is Upstate New York's Veteran Resource Center serving as a hub of information, programs and resources for veterans along with providing its own programs in various areas to serve veterans.  See their website for more information:  http://www.clearpath4vets.com/ 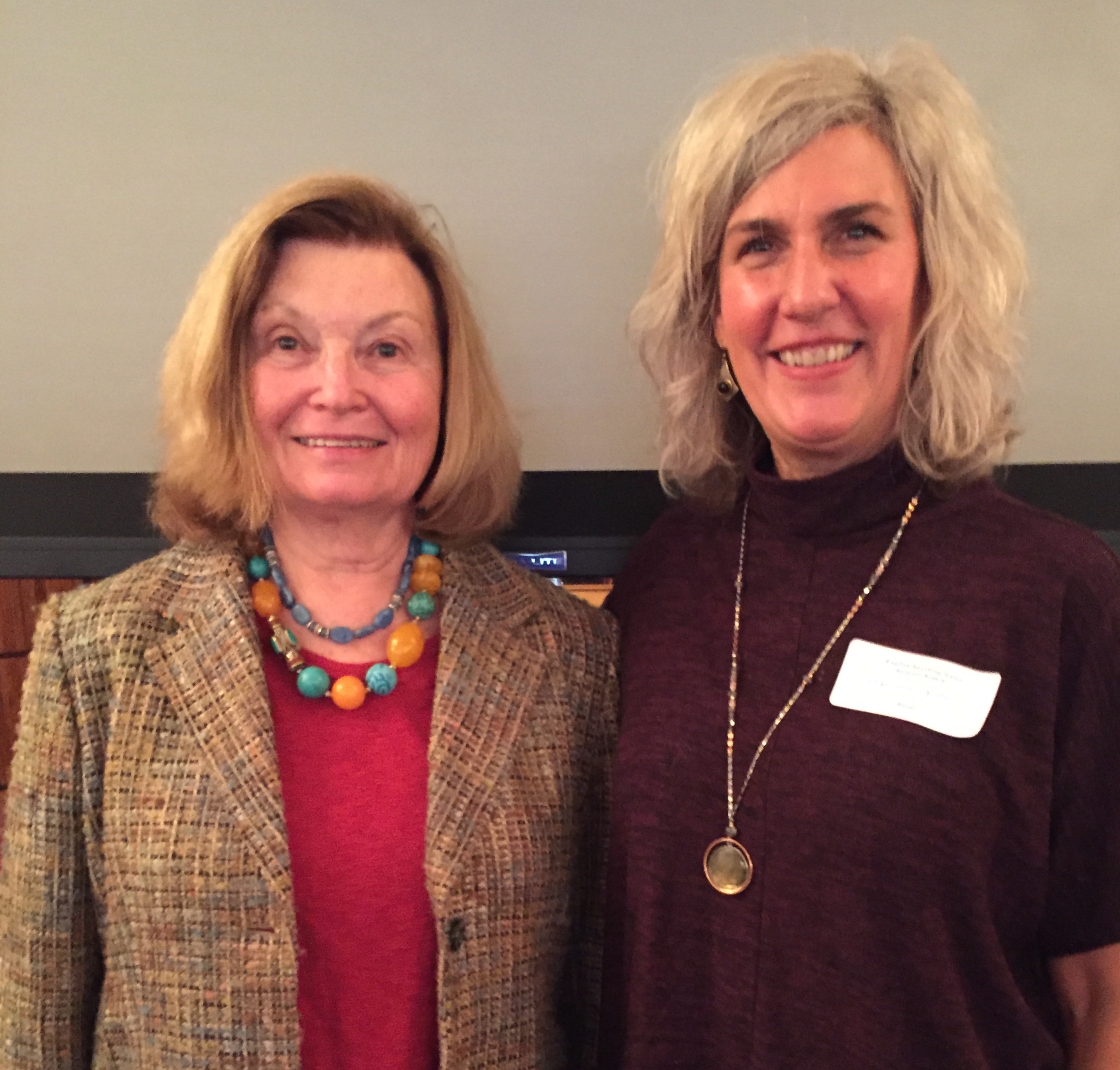 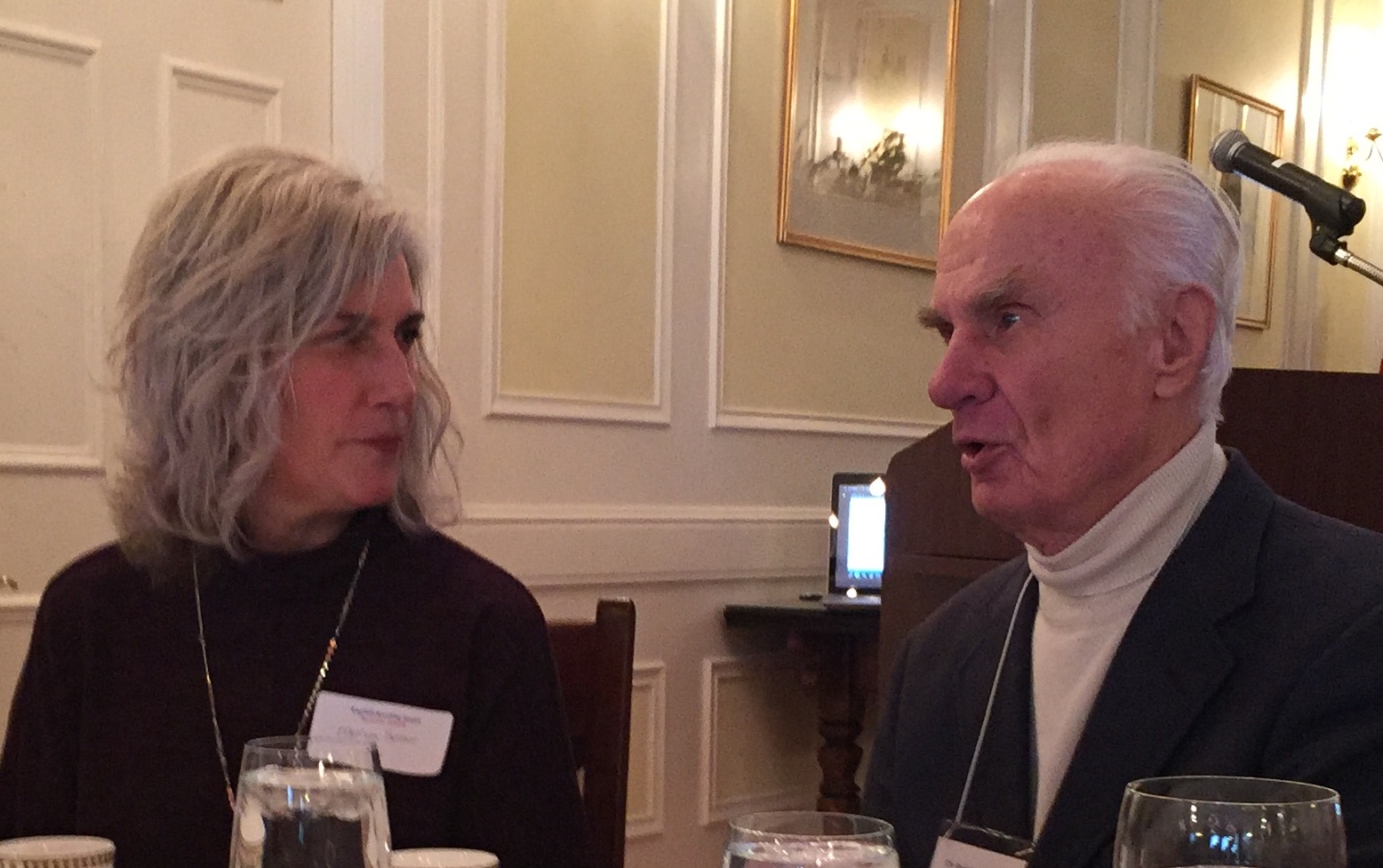