The Belle Aire Trio Handbell Choir helped to ring in the Yuletide Season.

A Show Business Tale of Two Cities: The Shea Vaudeville Venues in Buffalo and Toronto

A success story recounts the rise of Mike Shea, a dock worker who, with his brother Jerry, became the leading impresarios in Buffalo and Toronto. This saga in sepia of a long lost world also spotlights performers and audience during vaudeville's heyday in the last 19th and early 20th centuries.

One of the events that changed the S.U. campus and the city of Syracuse forever was the creation of the G.I. Bill, a series of benefits for World War II veterans, including a college education. Despite its relatively small size, S.U. enrolled more veterans than any other university in New York State.

The piano has a warmth, range and level of control unlike any other instrument, especially when it is played by a master pianist who has had years of teaching and lecturing in Central New York and concertizing widely across the United States.  Presented by Steven Rosenfeld, PhD Pianist and Teacher Colgate University 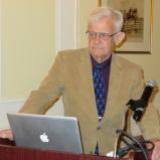 Medicines of the 1900's were both legitimate and fraudulent. Important medicines of the time were among the deadliest poisons known. Great fortunes were made from some of the proprietary medicines which at one time sat side by side with snake-oils and other deceptive concoctions.

"The British Royals: A Symbol of Durability"

A Message from the Syracuse Branch President

Established in 1948, The Syracuse Branch of the English-Speaking Union is a very active group. Our programs reflect our members who are spirited, thoughtful and concerned about intercultural and international communications. They share a genuine interest in people and community affairs. The Syracuse Branch meets the second Saturday of each month - September through May - at a private club. 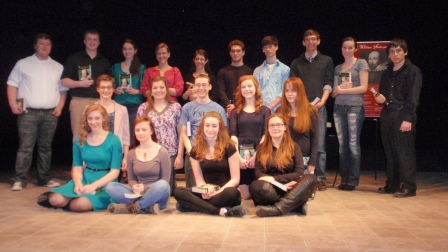 This is a banner year for the Syracuse branch of the English-Speaking Union of the United States for we held our twenty-fifth annual Shakespeare Competition on Saturday, March 2 from 9:00 AM until noon at Syracuse University's Storch Theatre.  Nineteen area schools participated, their amazingly talented students receiving enthusiastic compliments from the judges for their preparation, clarity and understanding.

Katharine Moran and Chris Broadwell from National had hoped to join us for our 25th competition.  Since such became impossible, they sent a letter from Alice Boyne and a certificate signed by Patricia Schroeder to commemorate the occasion.

We also presented a certificate of appreciation to SU Drama and Syracuse Stage for their support in providing a venue for our competition for all these years.  Chris Botek, assistant to Timothy Bond, artistic director of Syracuse Stage, accepted the certificate.

To complete our celebration, Riley Mahan, our 2011 winner, was on hand to share her New York City experiences and to encourage our participants.

Each of the nineteen school winners received a copy of Essential Shakespeare Handbook by Dunton-Downer and Riding and one of our own competition t-shirts.  All area school participants (145) received a certificate of participation.

Rachael Buchanan from Cicero-North Syracuse High School won first prize ($150 award) for her portrayal of the Jailer's Daughter in Two Noble Kinsmen and for her recitation of "Sonnet 29."  Once her engraved name joins the names of our previous winners on our commemorative plaque, it will hang in her high school for the coming year.  Rachael looks forward to joining nearly sixty other nationwide, regional winners for ESU's National Shakespeare Competition at Lincoln Center in New York City on April 21-23.

Our Second Place ($100 award) winner was Lexi Tucker from Union Springs.  She chose the role of Helena in A Midsummer Night's Dream and she presented "Sonnet 113."

Elizabeth Russell from John C. Birdlebough High School in Phoenix placed third ($50 award) as Viola from Twelfth Night and with her recitation of "Sonnet 149."

Syracuse University Professors Malcolm and Elizabeth Ingram presented a delightful program full of poems, and songs about love from the Egyptians, Elizabeth Barrett Browning, Hardy, and Shakespeare. Their performance poetic, romantic and comic that emphasized our feelings about love especially near Valentine's Day. This annual tea provided members and guests an opportunity to support the upcoming Shakespeare Competition while enjoying typical tea delicacies.